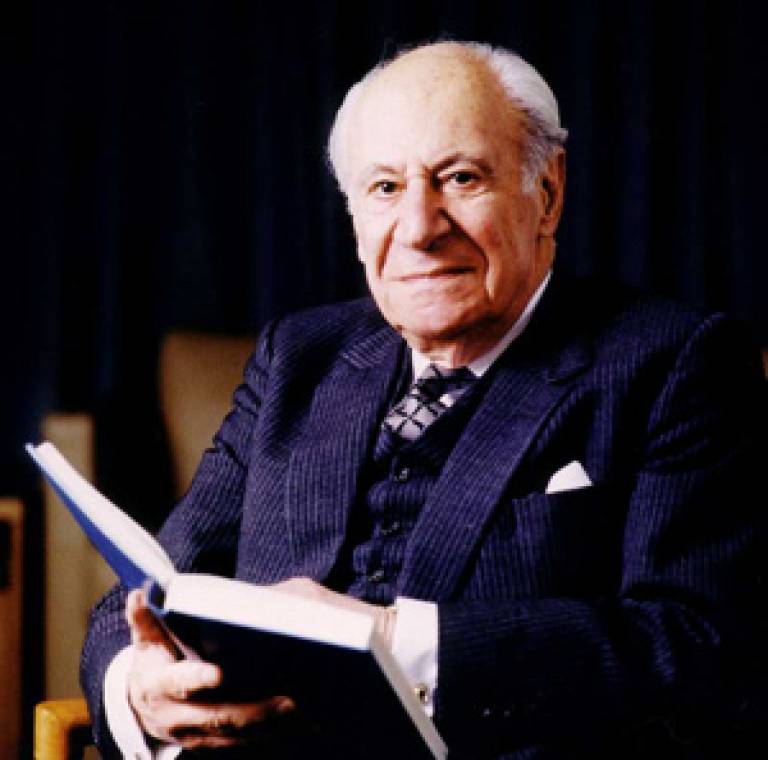 A great friend of the university, he was responsible for organising the refurbishment of the UCL Moccatta Library, resulting in one combined reading room for Jewish materials, called the 'Arnold Mishcon Reading Room' in honour of his late father, Rabbi Arnold Mishcon. The result is an extremely valuable resource for the study of medieval and modern Jewish history.

Lord Mishcon's three children established the annual Mishcon Lectures at UCL in 1990 to mark his 75th birthday and in recognition of his achievements and service in the fields of law, education, religion, government and politics, both central and local. The eclectic nature of the lectures reflect UCL's wish to encompass as wide a spectrum of social, economic, moral, legal and political issues as possible, in turn reflecting Lord Mishcon's varied career and wide-ranging interests.

The lectures have so far been given by high profile figures on a range of topical subjects. Lecturers have included UCL Professor of Laws, Philippe Sands QC, who talked on his bestselling book 'Lawless World: International Law after 9/11 and Iraq' in 2005 and Lord Harry Woolf, Chair of UCL Counsel and former Lord Chief Justice, who gave a lecture entitled 'Do we Need a New Penal Policy?' in 2004.

Lord Mishcon also established three annual bursaries in the UCL Faculty of Laws, awarded to undergraduate law students and based upon financial need and academic merit.

A pillar of the Anglo-Jewish community and of civic life, Lord Mishcon was opposition spokesman on home affairs in the House of Lords between 1983 and 1990, and acted as Shadow Lord Chancellor from 1983 to 1992. He also acted as legal adviser to a number of high-profile clients, including Jeffrey Archer, Robert Maxwell, Gerald Ronson, Lord Palumbo and Diana, Princess of Wales, whose divorce was handled by his firm. He also represented Ruth Ellis, the last woman to be hanged in Britain, supporting the campaign to have her death sentence reversed.

Lord Mishcon was a voice of reason in Middle East affairs, and was awarded the Star of Jordan (First Class) by King Hussein in 1995 for his role in the peace agreement between Jordan and Israel. Between 1984 and 1990 he had acted as a secret intermediary in negotiations between the King and the Israeli foreign minister Shimon Peres, offering the two men the use of his country house. He was also awarded the Star of Ethiopia and the Royal Swedish Order of North Star, Commander, both in 1954.

In 1992 Lord Mishcon became the first practising solicitor to be appointed an honorary Queen's Counsel. He was made an Honorary Life Member of the Law Society in 1994 "in recognition of his distinguished career as a solicitor and his considerable contribution to many areas of public life, particularly in local government in London and in Parliament".

He served on the Wolfenden Committee, which led to the decriminalisation of homosexuality, and also on the London County Council's education committees and the Inner London Education Authority for more than 20 years, as well as the boards of the National Theatre, South Bank Theatre and the London Orchestra.