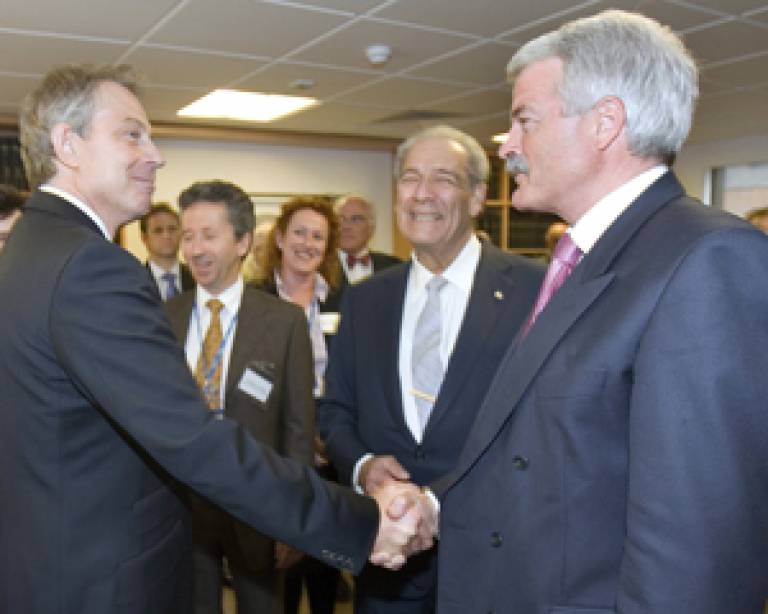 The institute, a joint venture between University College Hospitals NHS Foundation Trust and UCL - and supported by the Hatter Foundation - is a leading basic and clinical research centre for the understanding of cardiovascular disease, which aims to generate new therapies.

Mr Blair was given a tour of the new facilities at Chenies Mews by Professor Derek Yellon (UCL Medicine), the institute's director. Afterwards, Mr Blair, speaking in the institute's Elias Library & Seminar Room, said he was struck by the researchers' determination to translate scientific advances into treatments for patients. He said that, in the years to come, hundreds of thousands of people would benefit from the laboratories' work.

Professor Yellon said he was grateful for the past 15 years of support by the trust, UCL and the foundation. The foundation's backing had now enabled the institute to expand from the hospital's basement to new purpose-built research and clinical facilities.

Lady Hatter presented Mr Blair with a replica of a sculpture by Conchi Yellon, entitled 'Corazon al Centro' (Heart at the Centre).

Professor Malcolm Grant, President and Provost of UCL, commented that the institute was remarkable in two ways: as a unique partnership between the hospital and the university, and - building on this - as a leading centre for translational research and patient rehabilitation.