The UCL Institute of Archaeology hosted a successful half-day seminar on 31 March 2006. 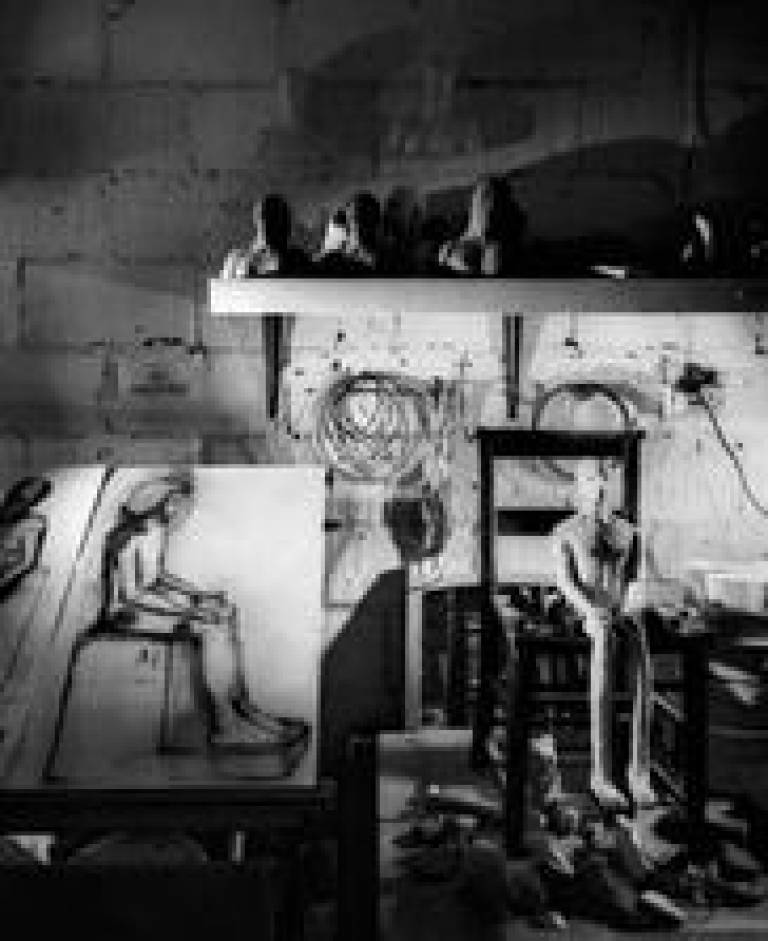 Chaired by Dr Helen Chatterjee, Acting Head of UCL Collections, the seminar focused on the relationship between museums and contemporary artists.

The context of the seminar was a major exhibition by Professor Christie Brown (University of Westminster). The AHRC-funded exhibition entitled 'Collective Traces' reflected on her study of UCL's Petrie Museum of Egyptian Archaeology and was on show appropriately in the foyer of the UCL Institute Of Archaeology. It featured several seated clay figures and modern day amuletic grave goods alongside ancient artefacts from the collection, and was informed by Professor Brown's interest in the everyday nature of the Petrie collection and our contemporary fascination with Egyptology.

The seminar represented a range of points of view within the subject area. Professor Brown discussed her interest in the parallels between archaeology and psychoanalysis and featured slides of her recent work as well ones drawn from the current show. She spoke about her interest in our preoccupation with objects as carriers of meaning and the ongoing influence of archaeology on her art practice.

Writer and potter, Professor Edmund de Waal, (University of Westminster) and Chair of the university's agenda-setting Ceramics Research Group, recently made an intervention and installation at the National Museum of Wales, Cardiff entitled 'Arcanum', which was created around his study of their vast porcelain collection. Professor de Waal's interaction engaged with the layers of ownership within a mass group, as well as reflecting more formal qualities of light and colour in the relationship with his own porcelain work. A third artist, Julian Walker whose approach to museum collections is more subversive, spoke about the challenges to power and access within museums with illustrations from various projects with which he had engaged such as inhabiting Kettle's Yard for a week and being allowed to use museum objects in the Hunt Museum, Limerick.

The second group of speakers came from the curatorial side with writer and curator James Putnam giving a fascinating overview of the relationship between artists and museum collections beginning with Andy Warhol's installation of hidden objects in the Museum of Art, Rhode Island School of Design, in 1970. His projects both at the British Museum and more recently the Freud Museum have helped to widen audiences and develop new ways of interacting with museum collections.

Hannah Redler, Head of Arts Programmes at the Science Museum, gave a lively presentation of the way in which the museum negotiates large scale art projects with contemporary artists to create sculpture that is integral to the science displays and the afternoon was completed by Dr Helen Coxall, (University of Westminster) a freelance museum consultant, who spoke about her engagement and involvement with the re-contextualisation and new presentation of museum artefacts towards a greater inclusivity, especially within the context of colonial cultures.