An audience with Putin

Dr Mark Bassin (UCL Geography) and Dr Alena Ledeneva (UCL School of Slavonic and East European Studies) were among the invited members of the Valdai Discussion Club in September 2005. 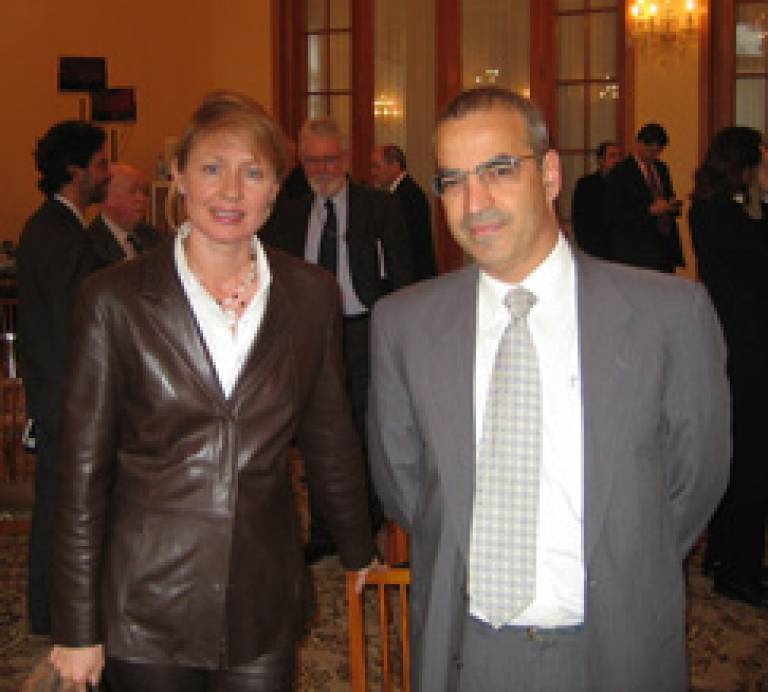 Guests were granted exclusive audiences with Russian President Vladimir Putin and members of his cabinet.

Organised by Russian press agency Novosti and the Council for Foreign and Defence Policy, the club is made up of a select group of western academics, journalists, political analysts and policy makers with an express interest in Russian current affairs. The club facilitates dialogue between members and leading figures in Russia's political and economic arenas in order to foster greater understanding of how Russia is viewed by external audiences, and for Russia to improve its image in the West.

Dr Bassin said: "It gives Russia watchers a better understanding of their administrative and political organisation, while providing an opportunity for them to hear and respond to Western concerns." UCL was honoured in having a particularly strong representation, with Harvard being the only other university to have two academics present.

Panel discussions were held during a boat trip along the Moscow Canal from the capital to the historic city of Tver, before returning for meetings around Moscow, including the grandiose surroundings of the Kremlin. Dr Bassin commented: "The meetings generated a great deal of interest from the Russian public, with broad and comprehensive reporting in the press and on TV, so in a way it was also a PR exercise in regard to Russian public opinion."

A number of key issues were addressed, with Putin emphatically confirming that he has no intention of changing the constitution and running for a third term in 2008. Dr Ledeneva said: "Oil was a very prominent theme and the issues were carefully addressed. There are lots of economic theories involved and it is a very complicated issue. Russia has negotiated an agreement with Germany over the Baltic pipeline, which takes the Ukraine and Poland out of the equation. Putin reassured the club that this agreement was not meant as a threat to them."

Foreign policy was also a hot topic of discussion, particularly in light of Russia's recent military training session with China as well as the US's presence in the Commonwealth of Independent States. "Putin was very impressive in the group discussions," explained Dr Bassin. "He really wanted to convince us of his position, explaining that he was both an ally of East and West, with 'partners' everywhere. However, the Orange Revolution in the Ukraine and Rose Revolution in Georgia seem to be a concern in Russia, with many Russians believing they came about due to United States influence."

"The differences in opinion between the European and US guests soon became apparent and it was very interesting to hear these perspectives," said Dr Ledeneva.

A spectrum of Russian viewpoints were represented at the meeting, the extent of which surprised Dr Bassin: "Political figures with opinions we would consider extreme were present, and who would probably not be offered such a forum in this country, but they seemed to be happy to offer them a podium. It was certainly interesting from my point of view to gain deeper understanding of the texture of Russian political discourse. The polar viewpoints certainly livened up proceedings, with a number of discussions becoming very heated and passionate arguments."

Dr Ledeneva is an expert on Russian politics. She has conducted research into corruption, informal economy, industrial barter, and shadow business in Russia. Dr Bassin is interested in cultural and political geography, with focus on the symbolic role of space and nature in the construction of nationhood and national identities, particularly in Russia, Germany, and the United States. This was the second time he has been invited to the club. Last year, the Beslan hostage crisis dramatically unfolded during the meeting. Amazingly, Putin openly discussed the situation with guests at his Moscow residence.

To find out more, use the links at the top of this article.
Image 1: Dr Ledeneva and Dr Bassin in Moscow