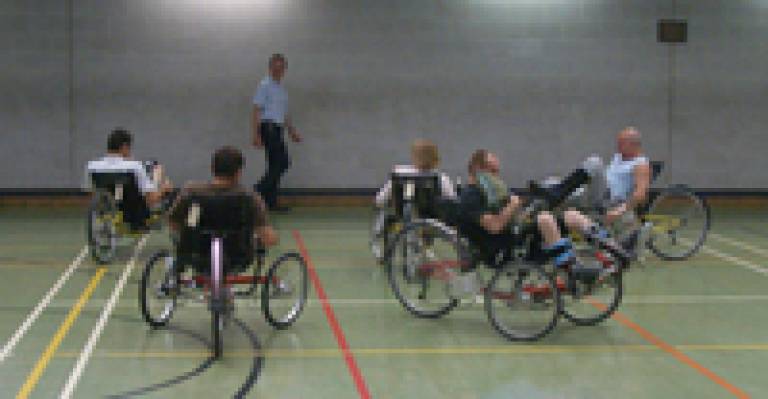 The athletes demonstrated the application of FES in rowing and cycling at the event.

FES artificially activates the paralysed muscle by passing short pulses of current through electrodes on the skin, which moves the legs. While cycling, a stimulator synchronises the stimulation with the pedal position while the person has a 'throttle' to control how much stimulation is applied - rather like a motorbike with the legs as the engine.

The health benefits of FES are far-reaching for people with spinal cord injury, as lack of movement can lead to wasted muscles, weak bones, heart disease, pressure sores, poor self-image and depression. Exercise through FES has the potential to greatly reduce these effects, and Professor Donaldson hopes to make equipment, such as adapted tricycles, commercially available.

Plans are also underway as part of the Campaign for UCL to create the first FES dedicated sports centre at UCL, which will offer a support service and catalyst for encouraging new users. Professor Donaldson said: "FES exercise is not just about improving health, but about enabling paralysed people to enjoy activities that you and I take for granted. We are planning the first ever FES International Games for next year- where Olympics will meet Formula One - as people train to boost their cycling speed while bioengineers fine tune the trikes and stimulators."

Image 1: Top: Playing the game which continued for over an hour
Image 2: Explaining the rules of a new game to the cyclists who are all completely paralysed below the waist