UCL was honoured yesterday by a visit from the Chinese Minister of Education, Professor Zhou Ji, and a number of senior Chinese officials, including Madame Zhang Xiuqing, Secretary-General of China Scholarship Council with which UCL has a joint scholarship programme, and Mr Wang Yongda, the Education Counsellor at the Chinese Embassy in London. 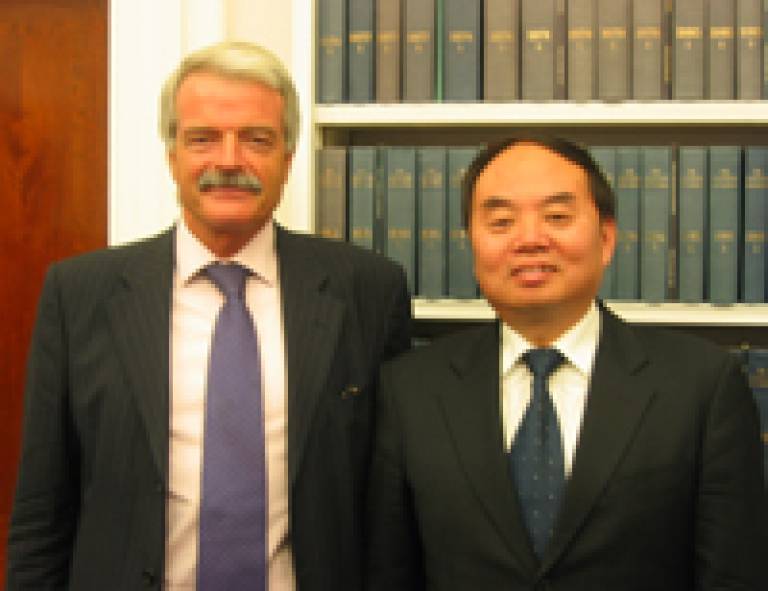 The visit was made possible by UCL alumnus, Stephen Perry who plays a leading role in Sino-UK business relations. Minister Zhou Ji is responsible for the largest education system in the world, serving more than 400 million pupils in over 550,000 schools and a rapidly growing number of students in higher education - estimated to be in the region of 16 million, or 25 per cent of the world's students.

The discussions chaired by UCL's President and Provost, Professor Malcolm Grant, were centred on three main areas. Firstly, on Minister Zhou Ji's vision of the role of international collaboration in the development of China's HE system. He considers that opening education to the outside world is an important part of China's development. This includes sending Chinese students to study abroad, of which some 800 now come to UCL, as well receiving foreign students to study in China, an opportunity that UCL is now beginning to use.

Secondly, on UCL's plans to collaborate with a leading Chinese university in establishing two chairs of law, one at Peking University in international and commercial law, and the other at UCL on Chinese law. These chairs will promote staff exchange, curriculum development and joint research. Minister Zhou fully supported these plans.

Thirdly, on the alternative models of university collaboration. Professor Grant explained that as a research-led university with internationally renowned centres of research excellence, he believes that the most constructive way for UCL to develop its collaboration with China is through a limited number of well-focused research and teaching partnerships with China's leading universities, in preference to establishing a free-standing campus in China. Minister Zhou welcomed this choice. The Pro-Provost for PR China, Professor David Norse, outlined the breadth and depth of these partnerships.