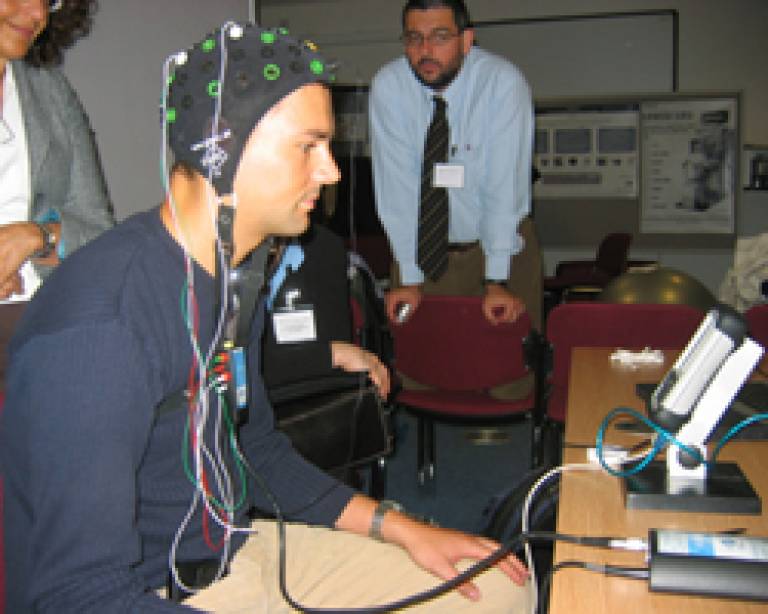 The technique enables a user to manipulate a virtual environment simply by thinking about moving around within it, without actually making any physical movements.

Initially, both the user and computer are 'trained' by the user imagining moving their left or right hand- without actually moving it - as directed by an arrow on a computer screen in front of them. During this twenty-minute process, the user wears a cap of strategically placed electrodes, which are wired up to a biosignal amplifier and then to the computer. The computer measures the user's brain signals, which are unique to every individual. The computer can then learn which signal dictates a particular direction of movement.

Once this one-off process has been completed, the user is ready to use the brain-computer interface. At the conference, this was demonstrated in UCL's virtual CAVE, an immersive room where images are projected onto three walls and the floor, which provides the user the illusion of being in a 3D environment.

Dr Doron Friedman (UCL Computer Science) and Dr Christoph Guger (Guger Tehnologies) have been collaborating on a project where the user has to 'walk' down a street using the interface. Dr Friedman said: "The cap monitors the user's EEG signals, and has to differentiate movements such as blinking from the important signals that make the user move around the environment."

The team has created an average high street populated by computer-generated pedestrians for the CAVE, which the user has to reach the end of. A series of beeps signals to the user what direction they should take. Should the user make a mistake, they are penalised by moving backwards.

Dr Guger explained: "This technology has many potential applications, particularly for those that have been severely paralysed. By using the brain-computer interface, they can easily communicate with others. The technology also opens the door to novel computer interfaces such as controlling desk-top PCs with your mind and controlling robotic limbs just by thinking about moving them."

Image 2: Walking along the virtual street