A slice of Camden

Primary school children from around Camden will be getting their hands dirty over the Easter and Summer school holidays at UCL's widening participation activities in the Institute of Archaeology. 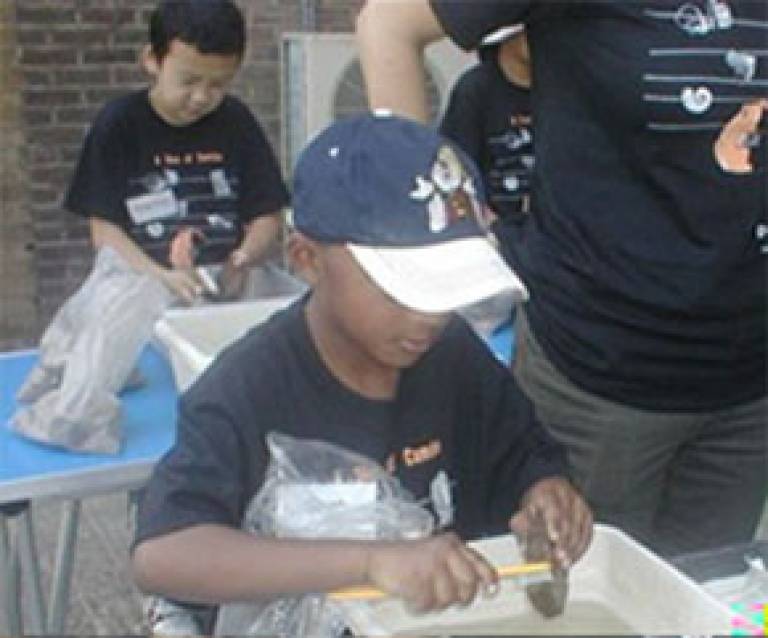 One of the initiatives organised by UCL and Camden Council, Slice of Camden is an introduction for 9-11 year-olds to local history and their heritage, archaeology and the university environment.

Ms Celine West, UCL's Education and Access Officer, runs the activity. She said: "Each activity lasts for one week and we recruit 25 children for each one. The children who are nominated by their schools are those who show an interest in the arts and humanities, but who could do with a boost to motivate them into developing their interest and their general skills."

This year, five activity weeks are being held at UCL over the Easter and summer holidays. Themes are local archaeology, Egyptian archaeology and marine archaeology, with tours, mock digs and handling sessions of artefacts from UCL's extensive collections. Ms West said: "Using the collections supports and enhances what primary children are learning at school, and introducing subjects they may not know about. It also enables us to introduce the concept of university in a very low-key way; even though they may be too young to think about their future, it still raises aspirations. Older primary children are forming ideas about their future, and pupils on the archaeology summer school last year were saying they wanted to be archaeologists when they grow up, and became comfortable in the university spaces that had previously intimidated them."

To get the pupils used to handling ancient artefacts, they are given pot sherds, coins and bones to handle on the first day. They are given responsibility for handling the objects and have to compile a list of rules that should be followed. They are then taken on a tour of the London Archaeological Archive and Research Centre at the Museum of London, followed by a mock archaeological dig where the pupils have to wash, record and draw their finds.

An introduction to the various strands of archaeology is given by way of a tour of UCL's Institute of Archaeology stores, where artefacts from Classical periods are examined along with examples of zooarchaeology, such as animal teeth. Pupils also get the chance to dress up as characters from different historical periods. The pupils are then able to research and map finds from their local area, and to discover what has been found near where they live. They are given an introduction to various historical periods, such as prehistory, Saxon, medieval and post-medieval, as well as stratigraphy, and they discuss the finds and what their implications could be for what existed in their areas during that time. The children put together a presentation on what they have learned and discuss what they might leave behind for future archaeologists.

At the end of their busy week, the children are taken to the Camden City Learning Centre where the log books they have been filling all week are turned into text for a website. Both the children and their parents are then invited to the Foundling Museum for presentations and to learn about local archives and the built environment heritage.

To find out more about the workshops or UCL's other widening participation activities use the links below.