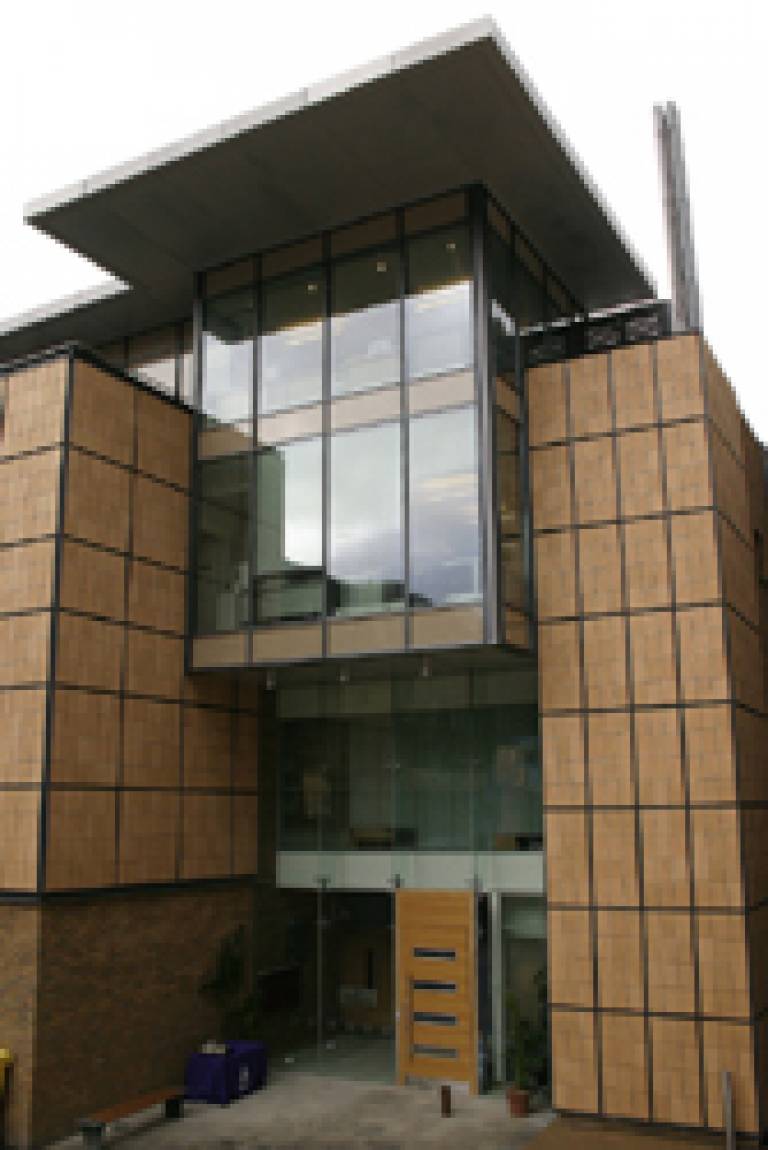 The building, home to UCL's new Molecular & Cellular Neuroscience Laboratories, is named for Nobel Laureate Sir Andrew Huxley, UCL's Jodrell Professor of Physiology (1960-1969) and Royal Society Research Professor in Physiology (1969-1983), in honour of his contribution to UCL and physiology.

Sir Andrew was present and took a tour of the new facilities, as did Lord Sainsbury, who met staff and students before unveiling a plaque in Sir Andrew's honour.

This new four-storey building accommodates researchers from UCL's departments of Pharmacology and Physiology, studying molecules which are involved in signalling in the brain, both in health and disease. The facilities were made possible through an award from the Joint Infrastructure Fund, a scheme run jointly by the Department of Trade & Industry, the Wellcome Trust and the Higher Education Funding Council for England. 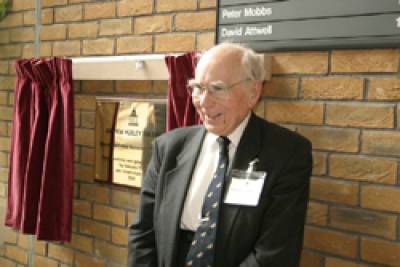 Professor David Attwell and Professor Peter Mobbs study how nerve cells send signals to one another, and what happens when this signalling goes wrong in disease states. Brain information processing involves nerve cells communicating by releasing the neurotransmitter glutamate, which acts on other nerve cells to generate a membrane voltage change. The glutamate signal is terminated by a kind of molecular 'vacuum cleaner', which removes the glutamate from outside the nerve cells.

However, in diseases such as stroke, perinatal asphyxia leading to cerebral palsy, and spinal cord injury, the power supply to this 'vacuum cleaner' is cut off, due to the loss of blood or oxygen supply. This leads to the 'vacuum cleaner' switching from sucking to blowing, releasing high levels of glutamate, which triggers the death of nerve cells and of cells in the white matter of the brain which normally make the nerve impulse travel faster. The occurrence of glutamate-evoked cell death in these diseases (and also in multiple sclerosis), which produces mental and physical handicap, makes it important to understand the molecular mechanisms by which glutamate signalling functions normally and malfunctions in disease.

Professor Annette Dolphin studies calcium channels. Calcium is an important messenger molecule controlling processes as diverse as muscle contraction, hormone secretion, fast information processing in the brain, and learning and memory. Calcium channels are membrane proteins which control the entry of calcium into cells. They are important drug targets in the heart and blood vessels - blocking these channels is used to treat high blood pressure - and in the brain and spinal cord, where they are targets for anti-epileptic and pain controlling drugs.

The group works on the molecular properties of calcium channels, how they determine normal cell function, and how defects in these channels can lead to clinical disorders such as epilepsy and movement disorders.

Dr Neil Millar studies nicotinic acetylcholine receptors on nerve cells (nAChRs), a family of cell surface receptors for the neurotransmitter acetylcholine which also mediate the addictive properties of nicotine associated with tobacco smoking. Nicotinic receptors are assembled from five protein subunits arranged in a doughnut shape around a central ion-permeable channel. The binding of acetylcholine (or nicotine) results in opening of the ion channel and a variety of subsequent intracellular signalling events.

The nAChRs are implicated in a range of neurological disorders, including Alzheimer's disease, Parkinson's disease, schizophrenia and some forms of epilepsy. Increasingly, nAChRs are being viewed as important target sites for therapeutic drug development. Additionally, invertebrate nAChRs are target sites for several major insecticides and anti-parasitic drugs used in crop-protection and animal health applications. The laboratory studies nAChRs, using a variety of molecular and cell biological techniques, with the aim of obtaining a better understanding of their roles in health and disease, and as drug targets.

To find out more about the departments use the links below.