Telescopes designed and built by UCL's Mullard Space Science Laboratory (MSSL) and Leicester University onboard NASA's Swift satellite have captured the birth of a black hole 3,000 million light years away  - an event never witnessed before. 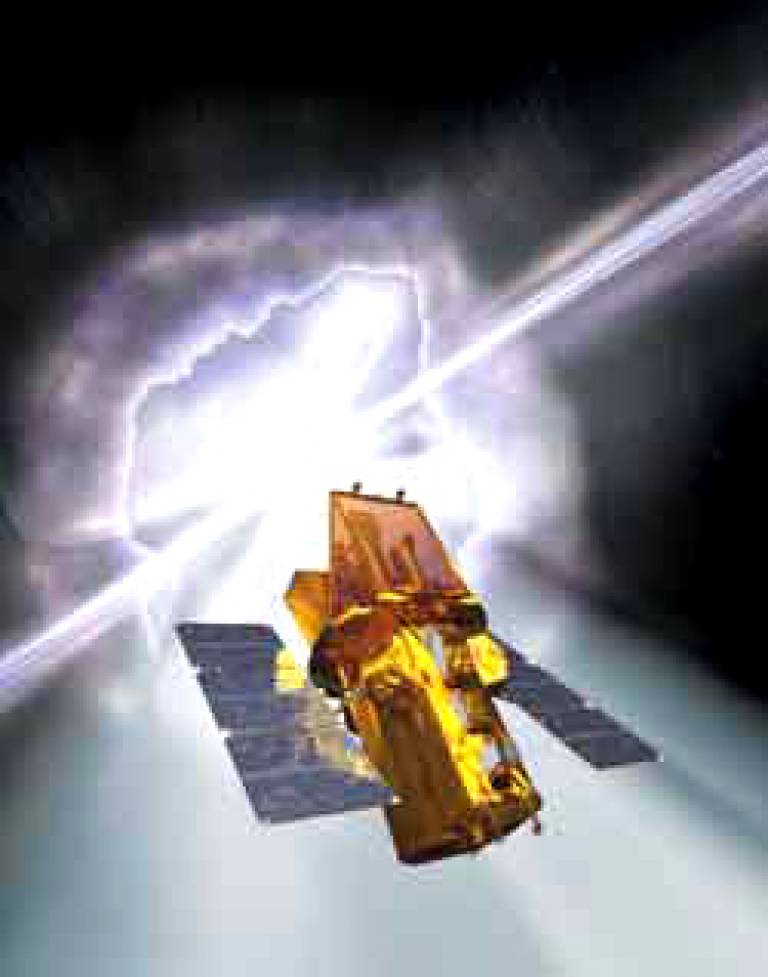 Launched at the end of 2004, the Swift mission aims to understand the origin of gamma-ray bursts - the most energetic explosions in the universe. It is thought that the bursts may signal stellar death and the birth of a black hole. The stars spiral toward each other and form a black hole at the time of collision. At this moment jets are formed which shine brightly in gamma rays for only a split second.

The burst witnessed by the UK scientists was of short duration, lasting around a tenth of a second, which could signal a collision between two neutron stars. Long duration bursts, lasting tens of seconds, are thought to suggest the explosion of massive stars.

Swift observed this event for the first time and crucially, determined its location - one of the main aims of the mission. Previously, no satellite existed that could respond quickly enough to these fleeting events. As a result, scientists know virtually nothing about short duration bursts.

UCL's Professor Keith Mason, Director of MSSL, said: "The Swift satellite is specifically designed to rapidly repoint at bursts as they go off. Every burst is a little different and when we add them all up we will begin to see the full picture."

Within one minute the x-ray telescope, partly built at Leicester University, started its observations and saw the faintest x-ray afterglow yet discovered. Rapid follow up with MSSL's ultraviolet and optical telescope revealed that the burst is next to a galaxy containing very old stars 3000 million light years away.

Professor Mason said: "This observation is hugely exciting as it will help us understand one of the outstanding mysteries in astronomy. Observing the burst in a region of old stars supports the idea that it was produced by collision of two neutron stars rather than by the collapse of a single very massive star."

In April, two long duration bursts estimated to be about 10.5 billion and 11.5 billion light years away were witnessed by Swift scientists. These explosions would have happened billions of years before the Sun and Earth existed.  At around the same time of the observations, MSSL scientists from across the engineering and research groups were receiving awards from NASA in recognition of their outstanding work on the mission.

Professor Mason added: "It is fantastic that UK scientists play such a major role in space research and receiving this award from NASA marks just the start of our voyage of discovery with Swift."

To find out more use the links below.