Bartlett works at the Royal Academy

UCL's Bartlett School of Architecture has cleared up at this year's Royal Academy Summer Show. 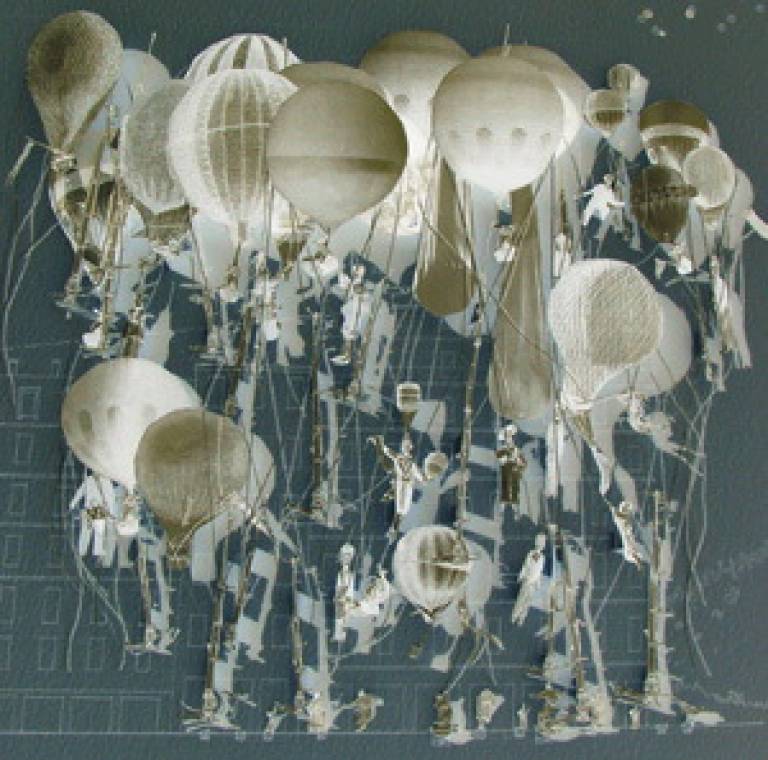 
CJ Lim's winning drawing was originally a competition entry for the Olympic Paris 2012 Landmark and was inspired by Jules Verne's Around the World in Eighty Days. The project comprises of a flotilla of thirty red, white and blue balloons, representing the countries participating in the games. From each balloon - which would be tethered up to 28 metres from the ground - hangs a double life-size papier-mâché figure clad in the national dress of the competing countries. The dancing shadows cast by both the balloons and mannequins would then activate a series of digital displays on the ground.

The drawings, three of which are on display, were painstakingly created by CJ Lim by cutting out tiny images of vintage balloons and figures from magazines, and then photocopying and hand-colouring them, before arranging them in display cases. The end result is a multi-layered collage, which is reminiscent of the imagery seen in Victorian greetings cards and the work of Heath Robinson, one of Lim's many influences. "Using collage was in part a reaction against all the computer generated architectural renderings. It was a return to basics to examine tactility, texture and finesse, it's also a form of recycling which is also very important to my work," explained Lim.

The drawings also received a special commendation from the Worshipful Company of Chartered Architects, who donated a prize for the best architectural drawing in any medium. Once the exhibition has finished, the project will go on permanent display in the V&A's architecture collection.

Smout Allen's entry, which won the best-of-show category, was originally designed for the Landmark East competition, held to find a landmark for the East of England. The team's entry - The Panorama Landmarks - proposed four landmarks, situated in four distinct areas, which each drew on the peculiarities of the landscape they were in. This meant the creation of wind kites in Bedfordshire, which could be ridden by visitors, a series of ponds, bathing pools and iced surfaces in the Fens, the creation of a working salt marsh in Essex and a series of drift markers on the North Norfolk coast.

Of these four, Salt Marsh and Coast are on display at the Royal Academy. The intricate, multimedia models of these landmarks convey perfectly the complex ideas behind the schemes. This ability to fully describe an architectural concept is the principal criterion of the AJ Bovis prize, which seeks:  "a project, yet to be constructed, that communicates through its presentation most effectively both to members of the general public and to the profession."

The Panorama Landscapes draw heavily on Smout Allen's research work into the innovative and technological augmentation of landscape through architecture and artifice. Laura Allen explained: "Each landmark, although constructed rather than natural, sits carefully in the environment taking advantage and sometimes mimicking the intrinsic qualities of the site."

The Royal Academy Summer Exhibition is the world's largest open contemporary art exhibition and features paintings, sculptures, drawings, prints and architectural models. There were over 8,000 submissions to this year's exhibition, which were then whittled down to the 900 pieces which are on display, 200 of which comprise the architecture section.

To find out more about the Royal Academy Summer Exhibition, on display until 15 August 2005, use the link below.