Congestion on the superhighway

Existing internet networks are already struggling to cope with the huge amounts of data being sent all over the world, and with the increase in internet users and the use of sophisticated applications such as video conferencing, the problem looks likely to get much worse. 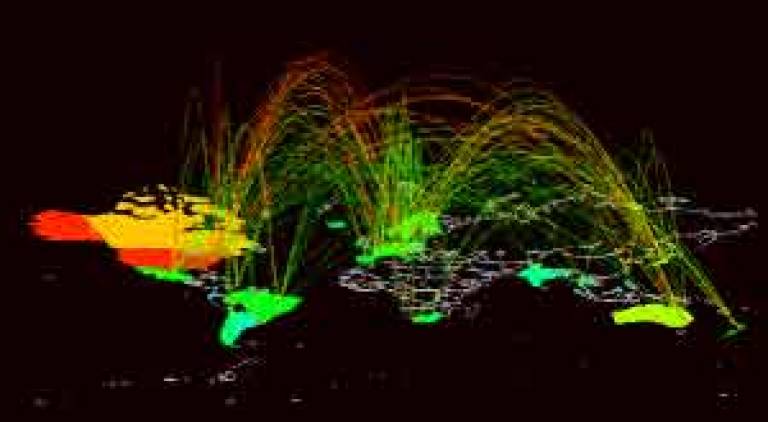 Dr Miguel Rio (UCL Electronic and Electrical Engineering) has plans to ease this predicament. "To send information from one computer to the other in the Internet, computers break the information into pieces called packets, which then travel through networks from the source computer to the destination," said Dr Rio. "These packets are like cars travelling along a network of roads, which in this case are several types of communication links, such as copper cables, fibre optic cables and satellites. At the intersections of the links, machines called routers direct the packets to their destinations."

Problems arise when there are too many packets queuing to be sent down one link, and the router becomes congested and has to drop packages. "The trouble is that at the moment, there is no way for a computer sending information to know how congested all the links are on the path to the destination, so knowing how fast to send information is an extremely difficult problem," explained Dr Rio.

Networks in use today were designed 20-30 years ago, but the need for capacity is increasing as today's applications become more demanding. Dr Rio is simply taking what exists and trying to get the maximum capacity from it by pacing the rate that information is sent. "No-one has control over the whole network; it's almost abstract" he said. "We need to change the behaviour of the sender of information. At the moment, as soon as a computer starts to send information to another, the destination computer sends an acknowledgement. Each time an acknowledgement is received, the computer sends information a bit faster. However, as soon as a congested router drops a packet of information, the sender halves the rate of outgoing information, but data has already been lost. If we can change this algorithm we can maximise transmission."

Because networks are getting faster, more packets can be sent in each link and applications send more data, when congestion happens, the waste capacity is growing. Dr Rio's solution is an application that could be freely installed on any computer, which would recognise that the network is congested or busy before sending any information, and then paces the packets accordingly.

Dr Rio intends to implement a method of receiving intelligent feedback from the receiver, with qualitative information from the network itself, which could include the use of new technologies such as artificial intelligence.

"The first beneficiaries will definitely be scientists, who have to send large amounts of data in strict time schedules. We really don't have an alternative to ignore this problem," explains Dr Rio. "Only about 1,000 people have an immediate issue with this, but in 10 years time, this problem will affect the public if it is not addressed now. 10 years ago, 50 per cent of people had never dialled up the internet, and the number of Internet users has been growing exponentially since then. Society is now highly dependent on these networks, including the stock markets and healthcare. This will require a major rethink of how we use the networks available to us."