A wake-up call for bacteria

A team of researchers including UCL's Dr John Ward (Biochemistry &amp; Molecular Biology) and Dr Brian Henderson (Eastman Dental Institute), together with the groups of Dr Nicholas Keep (Birkbeck) and Dr Christian Roumestand (INSERM Montpellier) have found out the structure of a protein that 'wakes up' dormant tuberculosis (TB) bacteria. 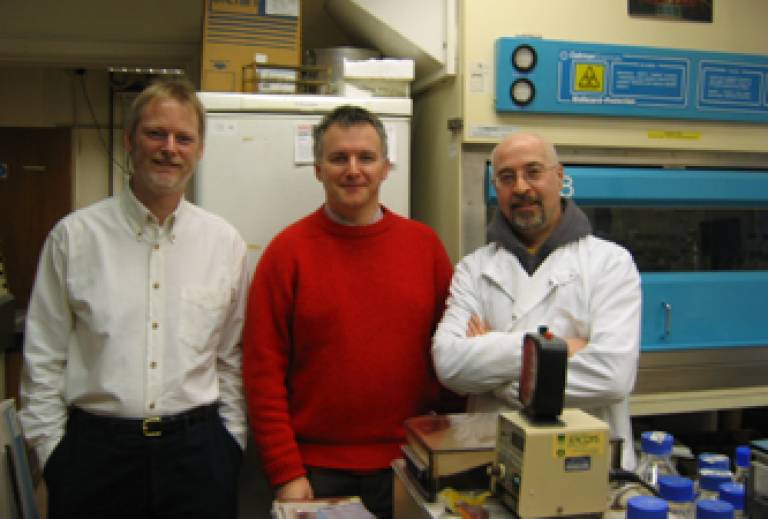 Dormancy of the TB organisms is a major problem for the treatment of this disease. The discovery, published in the journal Nature Structural and Molecular Biology, could lead to faster, more effective treatments for TB.

The team have found that the protein - known as resuscitation promoting factor (Rpf) - found inside the TB bacterium has a similar structure to a well studied enzyme called lysozyme, which attacks the protective cell walls of bacteria. Dr Ward explained: "This is the first mechanistic study of Rpf at UCL, which has a very strong record in TB research. It means that it will now be possible to deduce exactly how Rpf functions in waking up TB, paving the way for new drug treatments."

With two billion people carrying the disease worldwide, TB is the world's most common bacterial infection, with an estimated two million deaths from the illness in 2002 alone. In most people, TB lies dormant in the system, but when a person's immunity is low, whether because of old age or another illness such as HIV/AIDS, the TB is activated and they become acutely ill and highly infectious.

It is possible to treat the active stage of TB illness quickly with a course of antibiotics, but after the acute illness has gone, a small percentage of dormant TB bacteria remain in the system, requiring a lengthy course of drugs.

Since TB, poverty and unstable living conditions are inextricably linked, the long treatment regime currently needed to get rid of these last bacteria is a particular difficulty in global TB control, as a high percentage of people cease taking their antibiotics before they are completely rid of the infection, explained Dr Henderson: "Although active TB is quickly treated, the remaining dormant TB bacteria are very hard to reach, and take six months to treat with antibiotics. But if we can find a way of copying Rpf as a drug, and delivering it into the system so that it wakes up all of the TB bacteria, treatment will be faster and more effective."

To read the full paper in Nature Structural and Molecular Biology use the link below.