Want to make your mark on the world?

In 25 years, today's undergraduates will hold senior, influential positions in government and industry. 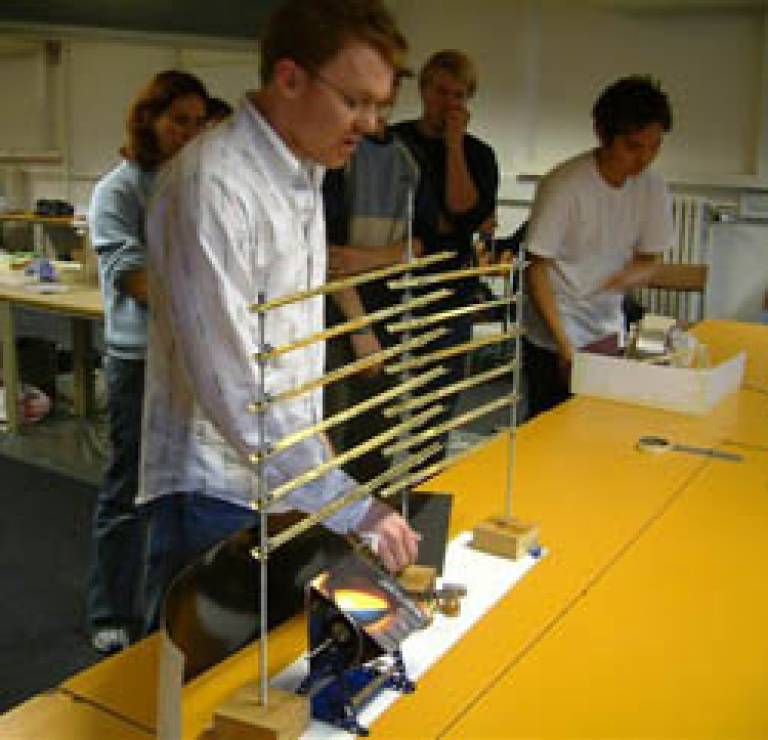 They will be the leaders whose actions affect millions of lives around the world.

UCL's Nick Tyler has been asking himself what skills these people will need if they are to have the greatest possible positive impact on the world. At the top of his list: problem-solving. The quality of the decisions they make will be the key factor in the extent to which their influence will benefit the world.

The experiences they have at university will be crucial factors in how they analyse problems and develop solutions.

Nick wants 60 of the brightest, imaginative, most analytical and most dedicated students to come to his department and spend three or four years honing their decision-making skills. He also wants them to join student clubs and societies, enjoy the nightlife, explore London's cultural riches, fall in love and make friends from around the world. But, as head of department, Nick's primary concern is that these students make the most of the radical new curriculum which his department will launch in 2006.

He wants to help them change the world.

The new curriculum is designed to equip people to do so. And, it will be taught within a department that has undergone a considerable cultural change, including a dramatic alteration to the makeup of its academic staff. Nick hired 11 new academics last year, most of them under 30, all conducting cutting-edge research. Nearly half the academic staff are now women.

Nick wants to mix up the student body, too. His department has long attracted high-quality applicants who go on to get good degree results. But where entry requirements had long been top A Levels in Maths, Physics and Chemistry, these subject-specific requirements have now been dropped.

Nick explains: "We look to recruit from the top 10 per cent of all students, the people who are ready to develop thinking skills that are already of high quality. We therefore require our students to have very high entry qualifications: top grades at A Level or the International Baccalaureate. That remains unchanged, but because we are interested in their thinking skills rather than the detail of their qualifications, we no longer have restrictions on the subjects in which those grades have been achieved. We are also keen to see what else they have been doing and we are interested in their GCSEs and the evidence of breadth of interest that these show."

All admirable, aspirational, worthy stuff, but please don't stop when you read the next sentence. Nick is Head of the UCL Department of Civil & Environmental Engineering.

"Undergraduate degrees in my discipline are often perceived as 'closed' options," says Nick. "That is, you study engineering so you can become an engineer. Actually, that's a false perception: of course, many of our students go on to become chartered engineers, but a sizeable minority of our students go on to work in finance. Banks like people who are grounded and are problem-solvers. Others become editors, facilities managers and management consultants, or work in government agencies. The Guardian University Guide 2006 rates our graduates' job prospects as 10 out of 10 - you can do anything after three or four years of intellectual challenge."

The changes to entry qualifications increased diversity in last year's intake. Indeed, one of the students in that year has a background in philosophy. It's early days, Nick says, but he senses that this diversity is fuelling more creative interaction between classmates.

By the way, the philosopher came top of her class last year.

Build yourself a nuclear reactor

The new curriculum is no less detailed in terms of the technical knowledge students acquire, but two aspects make it unique: it is studied though group design projects that will involve students in every year, and through the interdisciplinary 'clusters' of Context, Change, Mechanisms and Methods.

The programme is structured around a series of scenarios - eight during the first two years - which put the teaching into context. A scenario might consist of four weeks of teaching followed by one week in which the students combine their learning to solve a problem, or at least some aspect of it, in a large-scale example of a real design project. This might be a nuclear-waste recycling plant, an urban regeneration scheme or an island-based airport complex.

In this way they learn from the outset how to combine subject areas and how these combine to cause - and provide solutions for - real multidisciplinary problems. The projects allow them to think through the progression of teaching material, its breadth and depth, so that even the smallest, most detailed theoretical work is seen and understood in the context of the programme as a whole rather than within each subject in isolation.

Nick says: "Planning a bridge, for example, calls for the application of a diverse, very complex set of specific knowledges, from the technical - soil mechanics, fluid mechanics, structural mechanics, materials - to the social - transport patterns, sustainability, regional politics. Our intention is to make students take an integrated rather than isolated approach to these issues, from the very start of their degree, rather than toward its end."

Students will be involved in several projects during their studies and will thus experience a range of different types and scales of problems, as well as differences in technical and conceptual complexity.

The curriculum's use of clusters, as opposed to topics, mirrors the changes that have been made to medical education in recent years. Where once, for example, students might have taken separate courses based on a particular medical specialty (oncology or pharmacology), they now learn the same material through broader themes such as Circulation & Breathing or Infection & Disease.

Of the four clusters, Context is the most innovative, addressing issues such as society, politics, ethics, history and environment. No project ever occurs in isolation or without impact on the world around it. Context will facilitate analysis of factors such as: sourcing materials, dealing with by-products and environmental impact assessment; interactions between global, national and local economics; the impact of the built environment on society; and implications of new technologies.

Nick says: "Context will also aim to make our students more effective. There are forces even more significant than torque and gravity. People leading or contributing to a project must be able deal effectively and influentially with the very powerful forces of economics and of politics in its broadest sense.

"We have also introduced environmental engineering degree programmes to attract people who wish to learn how to apply environmental science to the real world, and who see this as a more appropriate route for them than 'standard' civil engineering."

Taught by those already shaping the future

Clusters will be overseen by academics who are leading researchers. The breadth of research interests among those who have joined the department recently, reflect the discipline's complexity. Their expertise includes: accessibility modelling; earthquake resistance; aerospace structures; public and private partnership; environmental control of airborne diseases; mathematical modelling of absorption processes; friction-induced vibration; and micro-mechanics of soil plasticity.

Professor Michael Worton, UCL's Vice-Provost (Academic & International), says the department sets an example for others to follow: "I am 100 per cent supportive of Nick's radical reworking of the departmental curriculum and very excited by it. This is exactly the kind of approach - both visionary and practical - that will enable UCL to realise its goals of preparing our students for responsible global leadership positions later in life."

Nick says: "There are three components to our programme for making the world a better place. First, our cutting-edge research. Second, our new degree programmes. Third, the recruitment of students who are willing and able to take up the challenge. A tremendous opportunity awaits those students who seek an educational experience that will further develop their creative thinking and decision-making skills - and, when their time comes, help them to run the planet competently."

Image 1: A cycling advertising display built as part of a problem-solving design exercise requiring lateral thinking by undergraduates during their first few weeks

Image 2: Around £2 million has been spent in recent years on a complete overhaul of facilities in the department