The ancient art of Balinese shadow theatre is providing UCL research student Giacomo De Caterini with the ideal subject matter to explore the use of multimedia techniques in anthropology. 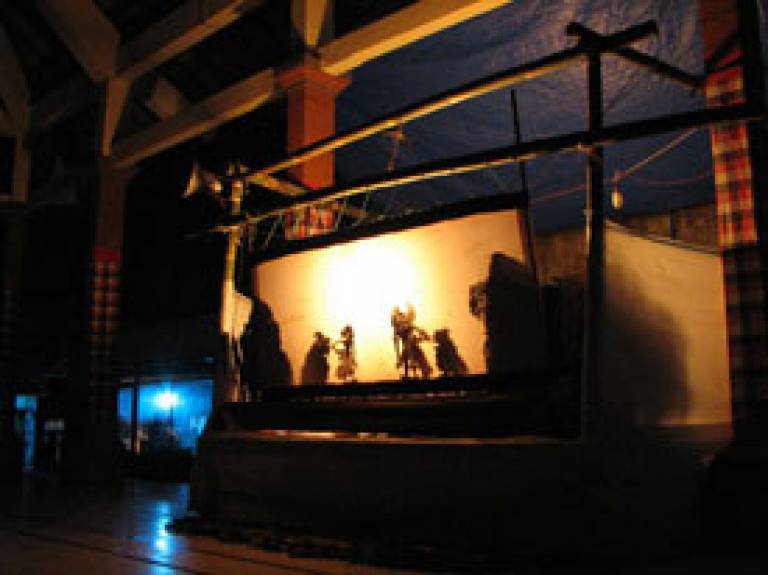 Traditional Balinese shadow theatre performances can last up to ten hours and are generally performed from around nine in the evening until first light of the following day. The plays are performed by one puppeteer - or 'dalang' - who can call upon a repertoire of over a hundred traditional plays, to each of which he will add his own interpretation. The majority of the stories are about gods and heroes and are often well known, in the way Shakespeare's plays are to a western audience.

Giacomo is interested in the interaction between the audience and the dalang, since the performances are very informal in comparison to western theatre: "People are able to walk in and out of the performances which often last until dawn. Members of the audience are allowed to look behind the curtain to see the dalang and can even stay there, if they choose."

Both the length and the fluidity of the performances represent peculiar difficulties to the anthropologist who wishes to record them: "There are many things going on at the same time, and it's the synchronicity of events and the amount of information which gets exchanged between the players which is difficult to represent from a time perspective. My hope is that multimedia will provide a coherent and complementary visual model to help our understanding of these rituals", explained Giacomo.

Giacomo co-wrote and presented a paper outlining his preliminary research at a recent conference at the Centro Incontri Umani, in Ascona, Switzerland, exploring the interface between ritual, theatre and film. "The basis of the paper was work I did with Dr Angela Hobart (Honorary Research Fellow, UCL Anthropology), comparing shadow theatre and healing performances in Indonesia, in which we asked, what is at the crossroads between visual anthropology, ritual and performance in theatre?"

The results of the paper were well-received, and Giacomo hopes to build on this success when he visits Bali again in the spring to gather more video and sound recordings, which will then be edited into multimedia presentations.