Evidence of earliest humans in the UK 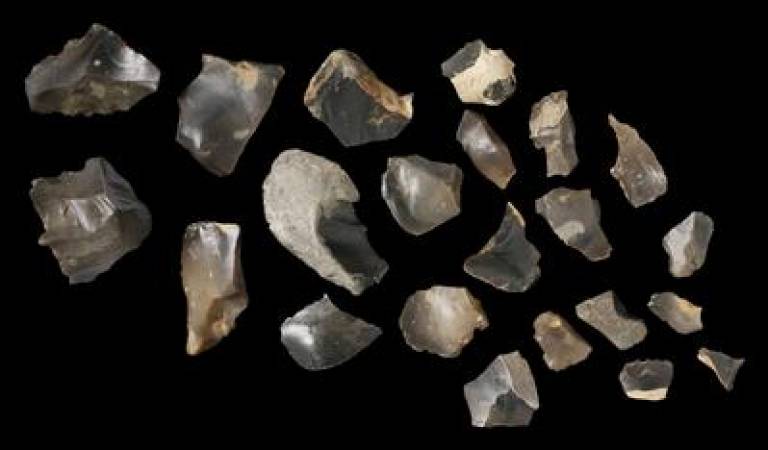 The findings, published on 15 December 2005 in 'Nature' magazine, pre-date the earliest known human occupation North of the Alps by 200,000 years.

Lead author of the paper Mr Parfitt said: "The colonisation of Eurasia by early humans is a key event after their spread out of Africa, but the nature, timing and ecological context of the earliest human occupation of northwest Europe is uncertain and has been the subject of intense debate. Until now, the earliest uncontested artefacts from northern Europe suggested that humans were unable to colonise northern latitudes until after 500,000 years ago."

The researchers found flint artefacts in the Cromer Forest Bed Formation at Pakefield, Suffolk, a region famous for its spectacular finds, including many extinct large mammals, molluscs, beetles, fruit, seeds and trees. Recent research has showed that the region includes six distinct temperature phases between about 780,000 and 450,000 years ago.

The sediments in the forest bed are mainly a result of mud and sand laid down by channels of rivers and floodplains before eastern England was covered in ice sheets about 450,000 years ago. During this time, England was connected to mainland Europe with East Anglia located in a coastal bay. In total, 32 flints, each more than 2cm long, and waste flakes were found in these sediments. Mr Parfitt said: "The artefacts, all in very sharp condition, are made of good quality black flint. Unworked surfaces, where present, are water-worn, indicating that the raw material might have been collected from an adjacent river channel."

"Fossils from the same sediments suggest that the local climate was very different from today in terms of temperature and seasonal precipitation. The remains of frost-sensitive insects and plants as well as of the hippopotamus, imply warmer summers and mild winters," said Professor Lister. "Together with evidence of an annual moisture deficit, this indicates that these early humans lived in a warm, seasonally dry, Mediterranean climate. Both the insect and plants indicate the presence of marshy ground with extensive reedy vegetation and alder trees adjacent to a meandering river. Oak woodland grew on drier ground with open grassland nearby. "

This mixture of habitats would have supported a variety of large browsing and grazing animals such as mammoth and bison, their predators and scavengers. Professor Stuart added: "This environment would have provided a resource-rich environment for early humans, with a range of plant and animal resources. An additional attraction, in an area where good quality flint was scarce, was the flint-rich river gravels, which provided the raw material for tool manufacture."

By comparing the site to another - West Runton- - of similar age and the material found there, independent paleomagnetic data and sedimentological evidence, the team can confidently state that the archaeology can be dated from 680,000 years ago at the youngest, and if evidence for ice-sheet extension across eastern England is valid, the archaeology found at Pakefield could be as much as 750,000 years old.

Mr Parfitt said: "There has been much discussion about what additional social, technological or physiological adaptations humans would have required to colonise northwest Europe compared to their occupation farther south. The Mediterranean climate reconstructed for the archaeological levels at Pakefield suggests that these pioneers were able to spread northwards in familiar climatic conditions, using their existing adaptations."