The achievements of one of Britain's greatest economists David Ricardo was commemorated with the unveiling of a plaque on 21 August 2005 at UCL. 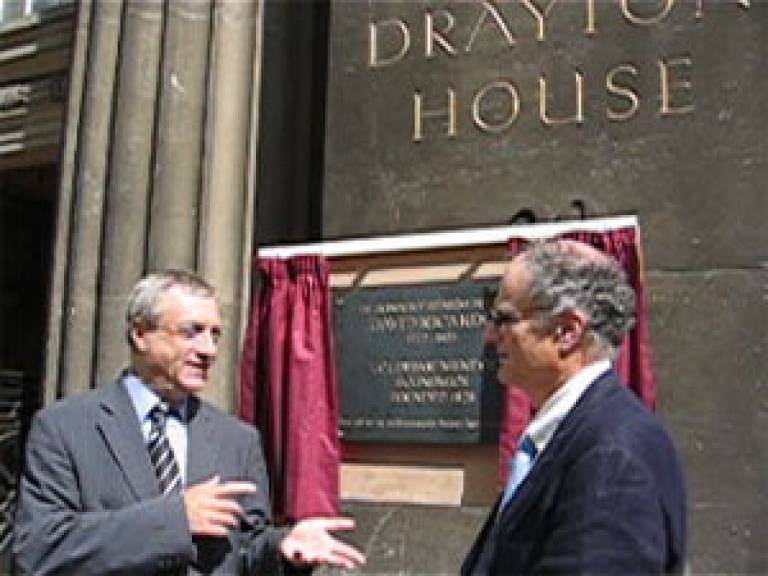 Ricardo is best known for his eminence as an economic thinker who was also closely involved in the city's financial history. His work initiated the now dominant tradition of economic analysis rooted in systematic theoretical modelling. To this day, his insights into the principles of trade and public finance remain pertinent.

As a trustee of the early modern Stock Exchange, he was a member of the Committee of Proprietors that decided in 1801 to reconstitute it on a private subscription basis and subsequently helped oversee the execution of the plan. He later played a leading role in syndicates contracting loans that financed the Napoleonic wars.

The Chair of Political Economy at UCL was created in 1828 with the assistance of funds raised to commemorate Ricardo -- establishing the first Department of Economics in England.

Ricardo was born in London in 1772 to a Jewish family at a time when the city had no university and would have been unable to graduate at either of the existing universities in England - Oxford and Cambridge - by virtue of religious restrictions. When UCL was founded in 1826, three years after Ricardo's death, it was with a commitment to provide opportunities for university education to those of all religious beliefs.

After his death in 1823 his friends in the influential Political Economy Club - figures such as Malthus and Mill - raised funds as a "tribute to his genius", to perpetuate his memory through the delivery of lectures on the subject of political economy.

When the university appointed Ricardo's distinguished follower, John Ramsay McCulloch, to its first Chair in Political Economy, these funds were transferred to UCL to support teaching of the subject.