UCL researcher Dr Margaret Aderin-Pocock (Physics &amp; Astronomy) has made it through to the finals of FameLab, the science world's equivalent of Pop Idol. 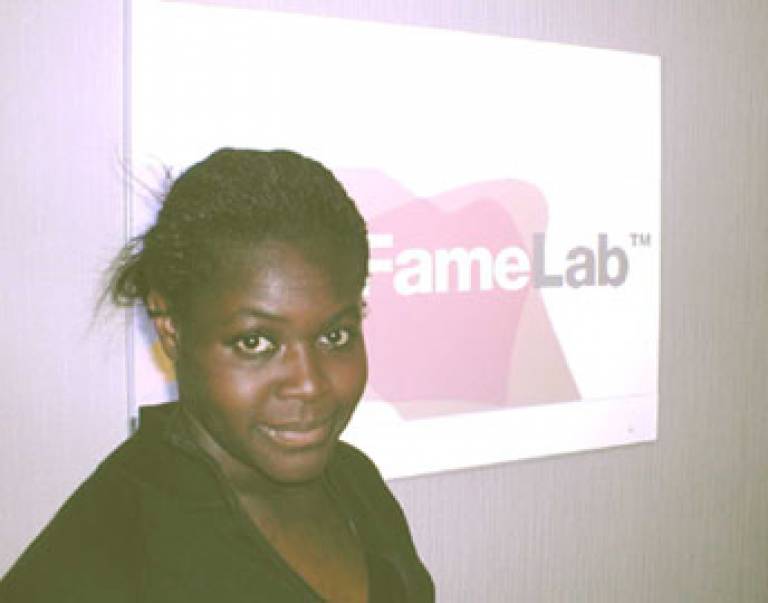 Dr Aderin-Pocock had to deliver two talks on a science subject of her choice to secure a place in the finals of the competition, which hopes to discover the new faces of UK science communications.


Competing against 40 other hopefuls from a wide range of backgrounds and experience Dr Aderin-Pocock had just three minutes to impress the judges with her talk, 'Why Study Science?' In it she described how she first became interested in science at the age of six after seeing a book about space in her local library, this then got her interested in telescopes which in turn kick-started her academic work in scientific instrument development. Dr Aderin-Pocock ended her talk by saying: "So why study science? Because the study of science gives us the keys to the universe, and one can have tremendous fun opening the doors!"

This enthusiasm and passion for science won over the panel of judges - which included UCL's Mark Lythgoe (ICH) - who selected her to appear in that day's second heat. This time Dr Aderin-Pocock chose to speak about her work at UCL's Optical Sciences Laboratory, designing and building a bench-mounted high-resolution optical spectrometer (bHROS) for the eight-metre Gemini-South telescope in Cerro Pachon, Chile. This proved enough to get her through to the finals, which will take place at this year's Cheltenham Science Festival on 11 June 2005.

Dr Aderin-Pocock said: "I really felt the pressure at the Bristol heats  - three minutes is not long enough to get a scientific concept across to impress the judges but the atmosphere at the venue was great, really friendly with everyone exchanging ideas, and the judges were so encouraging giving helpful advice on what we said, with no Simon Cowell attitudes to scare people away. If anyone thinks that scientists are unemotional they should come along to the finals. I almost cried when they said that I had got through."

For further details on the competition use the link below.