The strength of hurricane activity striking the United States during the main hurricane season can now be predicted with significant accuracy thanks to a new computer model developed by scientists at UCL. 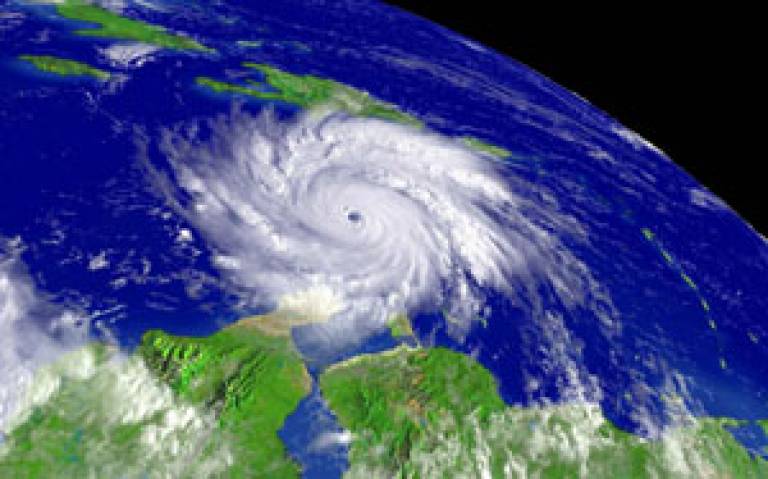 The model, unveiled in a paper in the 21 April issue of the journal Nature, will enable government, public, emergency planning bodies and insurers with US interests to receive warning in early August of the likelihood of either high or low hurricane damage during the subsequent main hurricane season from August to October. This scientific breakthrough offers the potential to significantly reduce the financial risk and uncertainty associated with each hurricane season.

The model, developed by Dr Mark Saunders and Dr Adam Lea (Benfield Hazard Research), uses anomalies in wind patterns from six regions over North America and the east Pacific and North Atlantic oceans during July to predict the wind energy of US striking hurricanes for the main hurricane season. The July wind anomalies are from heights between 750 and 7,500 metres above sea level and exhibit a consistent and significant link to the energy of US landfalling hurricanes during the subsequent hurricane season. The wind anomalies in these regions are indicative of atmospheric circulation patterns that either favour or hinder evolving hurricanes from reaching US shores.

The year-on-year variability in the number of hurricanes making US landfall means that skilful seasonal forecasts of activity would benefit both individuals and a range of decision-makers. Hurricanes afflict Florida, the eastern seaboard and the Gulf Coast. They rank as the US's most expensive natural disaster and are responsible for eight of the 10 most costly catastrophes to have affected the country. The annual average damage bill from hurricane strikes on the continental US between 1950 and 2004 is estimated at $5.6 billion (at 2004 prices).

The model correctly anticipated whether US hurricane losses were above-median or below-median in 74 per cent of the years between 1950 and 2003. It also performed well in 'real-time' operation in 2004, predicting US landfalling hurricane wind energy in the upper quartile for this active and damaging hurricane season. Insurers and others would have reduced their losses in 2004 by acting upon the forecast.

"For over two decades scientists have been attempting - with little success - to deliver seasonal predictions of hurricane activity reaching the coast of the United States," said Dr Saunders. "This study is the first to offer forecast precision which is high enough to be practically useful. Our use of height-averaged winds as a predictor is innovative for seasonal weather forecasting and may benefit the seasonal prediction of tropical storm landfalls elsewhere in the world."

To access the forecast for the 2005 US hurricane season or to find out more about the Benfield Hazard Research Centre use the links below.