Women and men are becoming wider and heavier, according to the results of a new national sizing survey led by UCL's Professor Philip Treleaven.

Size UK is Britain's first national survey of body measurements since 1951, the first to include men and to use 3D scanning rather than measuring tape. The results of the survey confirm that decades of better nutrition, health care and the influence of sedentary lifestyles, have contributed to a widening of the human form.

Professor Treleaven said: "Women's key measurements have all increased by 1.5 inches (height, bust and hips) but their waists have gone up by a massive 6.5 inches." 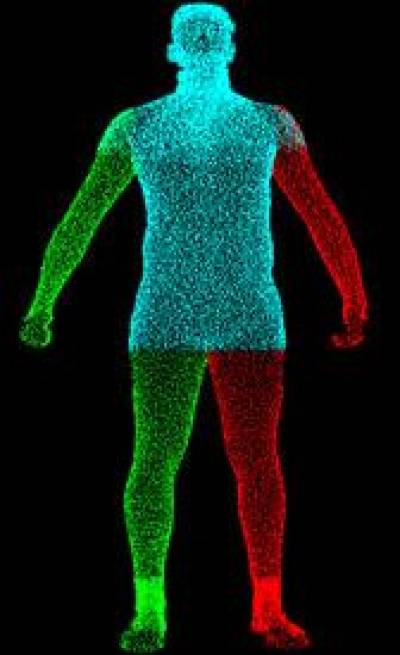 During 2001 and 2002, 1.5 million measurements were taken from more than 11,000 people, representing men and women aged from 16 years to 95 years across three regions, considering ethnicity and socio-economic factors. Using 3D scanners developed by technology company TC2, body shapes were mapped in a matter of seconds. Within a booth, volunteers had a series of white lights projected on them. The curves of their bodies then distorted the pattern of the stripes, which was captured by six cameras and then processed on a computer. This produced a point cloud, which was then used to create a digital skin. Professor Treleaven said: "It's like placing a virtual tape measure around different parts of the body and reading off the measurements."

Professor Treleaven said that the survey's outcome should lead to improvements such as better-fitting clothing in the UK, safer seatbelts and more accommodating airplanes. The survey also saw the use of new shape software developed by Bernard Buxton, Professor of Computer Vision in UCL's Department of Computer Science, which analyses the body-shape data, measuring variations in posture as well providing statistical analysis of information captured by the 3D scanners.

For more information about Size UK use the link below.