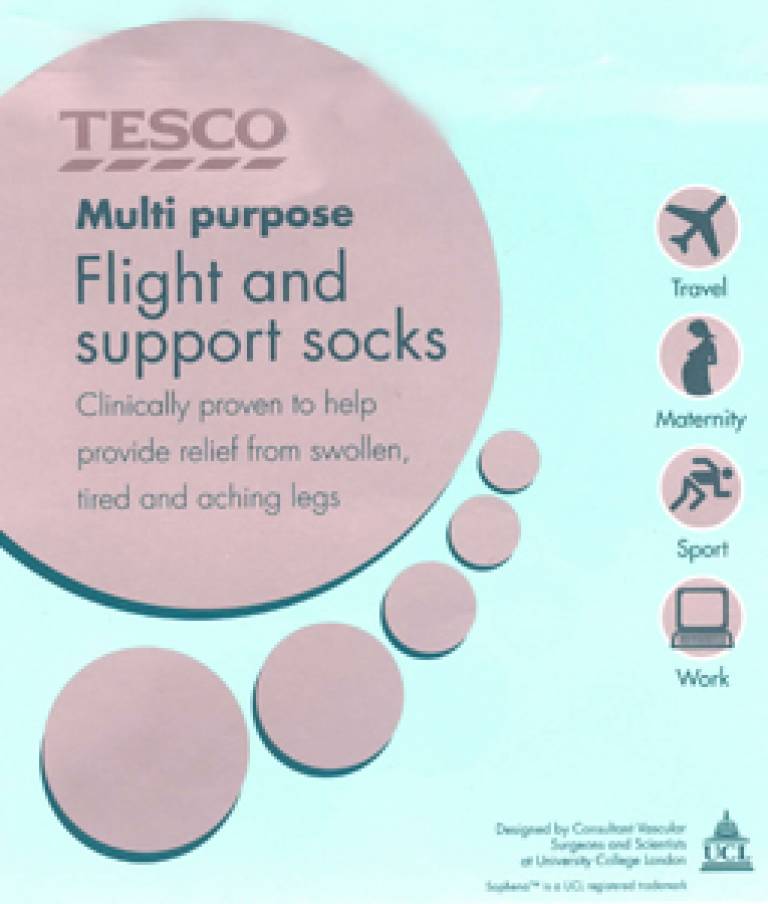 Originally, development of the sock began in 1999 as part of a larger research programme in to the cause of some diseases of the veins. The research highlighted a number of problems with existing clinical compression hosiery, most notably its poor take-up rate amongst patients, with less than 50 per cent of those needing compression hosiery actually wearing it.

Dr Hollingsworth said: "A number of factors came out of the research, centred around patient compliance which spurred us on to develop a product to overcome these issues. Patients found traditional compression stockings difficult to put on, unsightly, and uncomfortable. This meant developing something which was easy for ward staff to use and which patients were happy to wear, whilst at the same time, still providing the compression as required."

The team worked closely with the UK manufacturer, Pretty Legs Limited, and UCL BioMedica to develop the Saphena Medical sock, which is now widely used in the healthcare sector. This expertise has now been applied to the retail sector through the Saphena Active stocking range.

"We've now taken the product, which was originally designed for the medical setting, and adjusted it to suit a broad, new audience. The compression stockings provide relief from soreness and swelling for people who are on their feet all day, and for pregnant women. They are also suitable for frequent travellers who want to help minimise the risk of DVT, which is most likely raised amongst people who sit in one position for long periods of time", explained Stephen Barker.

One of the key advantages of Saphena Active is its sizing. "We originally wanted a one size fits all sock and while we didn't quite achieve this, we got to the stage where over 90 per cent of the population could be accommodated. This has meant that we only need to manufacture two different sizes, which is quite a coup as most of the other manufacturers making similar products still require three or four sizes," said Stephen Barker.

The broad appeal of the sock, together with the cachet of the UCL endorsement, were key factors in Tesco's decision to approach Saphena about supplying their socks. The sock is branded by Tesco as a multi-purpose flight and support sock and is currently being trialled in 50 per cent of their stores. Initial sales have been very encouraging and it is anticipated that the sock will be rolled out nationwide. The sock is also being marketed under the UCL Saphena Active brand, which will provide versions for everyday wear, maternity wear, travel wear and sportswear.

UCL BioMedica Plc builds partnerships between UCL's bio-research base and industry, to find out more about UCL BioMedica, use the link below.