To commemorate the arrival of 14 Japanese students of the Satsuma clan in 1865, a group of the same clan followed their ancestors' footsteps by paying a visit to UCL in December 2003. 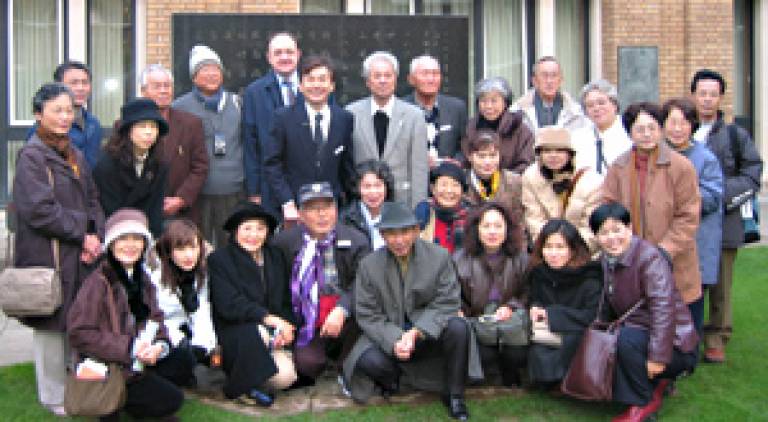 The students were noblemen, who had to endure a treacherous voyage to the UK. When they arrived, UCL was the only university in England in which both teaching and research were open to all races and religions, and to people of all social classes, regardless of their political leanings. The students registered for Professor Alexander Williamson's classes in analytical chemistry, and the academic also took them into his home. The students were keen to advance the technological capabilities of their nation, and returned to play key roles in the development of modern Japan. UCL's first students from Japan had arrived two years earlier, and the visit also marked the 140th anniversary of their enrolment.

Professor Izumi Haraguchi from the University of Kagoshima is a Satsuma clan member and was amongst the visitors to UCL. He said: "Satsuma people wanted to come to Great Britain and learn everything about western civilisation and some managed to, and on their return the Satsuma clan played a part the civilisation and modernisation of Japan. We learnt law and engineering mostly from Great Britain. This is a very memorable visit - the 140th anniversary of course - but with the present day's international problems, this is a great chance to think about world peace. We are very proud of our ancestors who studied at UCL, so many of our clan want to visit this very place."

This affinity to UCL was illustrated by one of the visitors, Mr Mitsuo Kano, who has pledged to return next spring to plant two cherry blossom trees, which will mature in time for the 150th anniversary in 2013.

Today, there are more than 180 Japanese students at UCL, and the university's teaching and research links with Japan are stronger than ever. Professor Philip Treleaven, UCL's Pro-Provost for the Far East, gave an example: "The London research centre of the Eisai Pharmaceutical Company is located in the heart of the UCL campus. Eisai is one of the leading Japanese companies in its field, and the centre conducts long-term neuroscience research. At the time of its establishment in 1993, it was the largest single investment in a British university. The research director of the centre grew up in the Shogyo-ji Temple in Kyushu, and when UCL representatives travel to Japan, we often stay in there."

Image: Members of the Satsuma clan at the UCL Japan Monument.

To find out more about UCL's connections with Japan, use the links below.