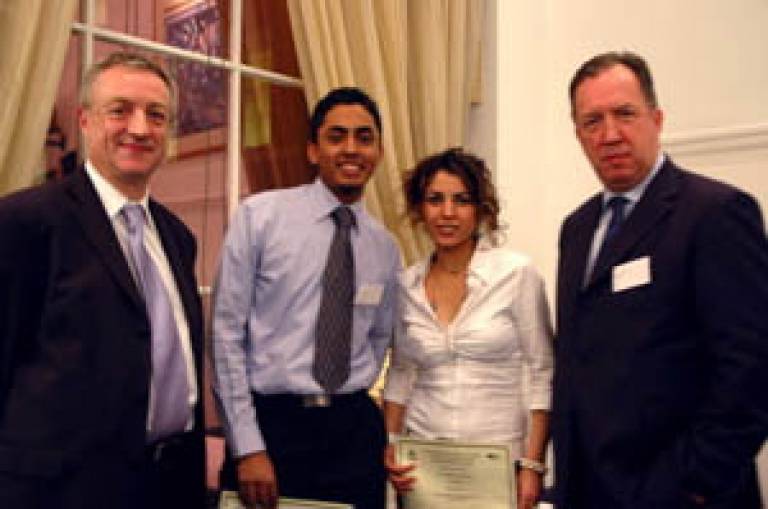 Zerrin Koca and Suleman Rahman showed outstanding improvement during their time at CIC and overcame disadvantage to achieve entry to UCL. Both students were presented with an award of £2,000 by Professor Michael Worton, Vice-Provost of UCL.

Talking about the radical changes that had occurred at UCL over the past few years, Professor Worton explained how the relationship between the university and CIC had evolved over time, with UCL now the most popular destination for CIC science students. Frank McLoughlin, Principal of CIC, reflected on the relationship between UCL and CIC, which he humorously described as being like an arranged marriage. He commented: "We may not be in love, but we've grown fond of each other over the years."

Now in its second year, the Provost's Prize is to be awarded to only one student per year, but this year, the strength of the two winning candidates made it impossible for the judges to decide between them, so an additional award was funded.

Zerrin, a first-year mathematics student, is a Turkish Kurd who came to the UK a few years ago. When she first entered CIC in 2002, she had to take classes to gain a grasp of English, but she nevertheless went on to pass A-levels in mathematics, further mathematics, physics, chemistry and Turkish with top grades. Talking about the award, she said: "Circumstances were really difficult in Turkey, but I got good grades there and I am really pleased I can get good grades here as well. I truly appreciate the help and support I receive at UCL. Maths is a lot of hard work, but I believe as long as you study hard, you'll get there. I would love to do my PhD and become a maths professor one day!"

The prize money will be invested in her education, said Zerrin: "I'm trying to find part-time work as a maths tutor at the moment to help me get by, and the only people I have to support me here in the UK are my sister and nephew, so this prize is very helpful to me."

Suleman joined CIC from Holloway Boys School. He obtained A-levels in maths, chemistry and biology and is now in his first year at UCL studying medicine. Suleman's brothers also attended UCL, so there is a family tradition of studying at the university.

He said: "I am absolutely delighted to receive the Provost's Prize. I had to look at the email five times to believe that I'd won it. I found the UCL link with my college to be very helpful, and I am grateful for the support I received at CIC. I'm enjoying my course so far - before it started I thought I would want to be a GP, but now I'm thinking about hospital medicine. I've earmarked half of my prize money for a laptop for my work."

UCL and CIC are linked in a Partnership of Excellence, an innovative initiative formed four years ago in consultation with the DfES to raise the achievements and aspirations of the students in the sixth form college, and the prize forms part of this collaboration.

To find out more about UCL's widening participation activities use the link below.