UCL's President and Provost, Professor Malcolm Grant, visited Hong Kong in November 2004 for a special launch of the Campaign for UCL - Advancing London's Global University, to former students and friends of UCL. 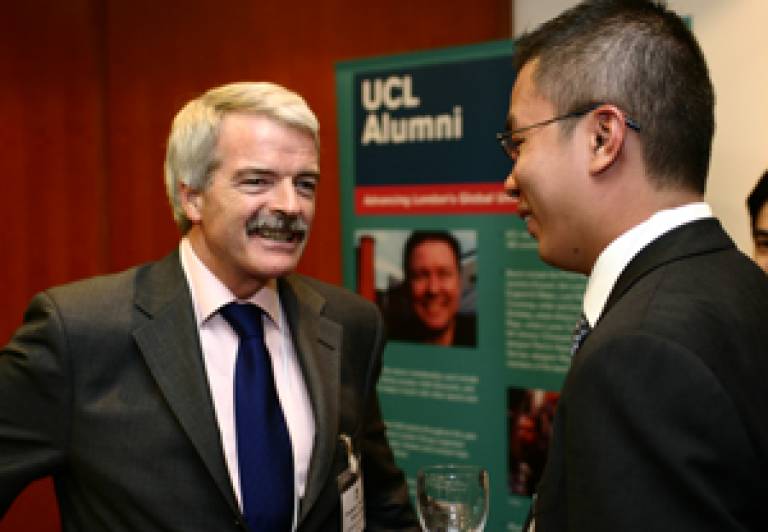 More than 100 alumni, from both the island and mainland China, attended the event.

Professor Grant began his address by stressing how important it was to maintain strong links with the more than 1,000 former UCL students who are resident in Hong Kong. He also talked about UCL's recent achievements, whilst emphasising that the university must continue to move forward: "UCL is an institution which is in good shape. But what I'm concerned about is that we clearly can't stand still, we've got to react to the way in which the world is changing. As the world is becoming much more globalised, so UCL must become much more globalised."

The key to success on a global stage is through the quality of our research, explained Professor Grant: "We need to diversify our funding streams if we are to become more successful in attracting research grants than we are today. Already, our research income outstrips our teaching income. This is a global, research-intensive university. It's one which is starting to shift its balance from being almost entirely undergraduate to being increasingly postgraduate."

Professor Grant ended his speech by commending the work that UCL's alumni do throughout the world: "We regard our alumni as a major part of our future, and by that I don't just mean those who contribute generously, as many of you have been doing, but as ambassadors who put out the good name of UCL throughout the world."

Professor Grant also met with the Dean and Vice-Dean of Peking University Law School, Beijing, to discuss future collaborations between the two institutions.

Prior to his Hong Kong visit, Professor Grant spent time in Japan establishing relationships with some of the country's top universities. During his stay he met with the presidents of Tokyo University, Waseda University in Tokyo, Osaka University and Osaka City University, as well as meeting the Mayor of Osaka.

To find out more about the Campaign for UCL or alumni groups around the world use the links below.