A radical new art gallery designed by the Bartlett School's Professor Peter Cook and Professor Colin Fournier was opened in Graz on 25 October 2003. 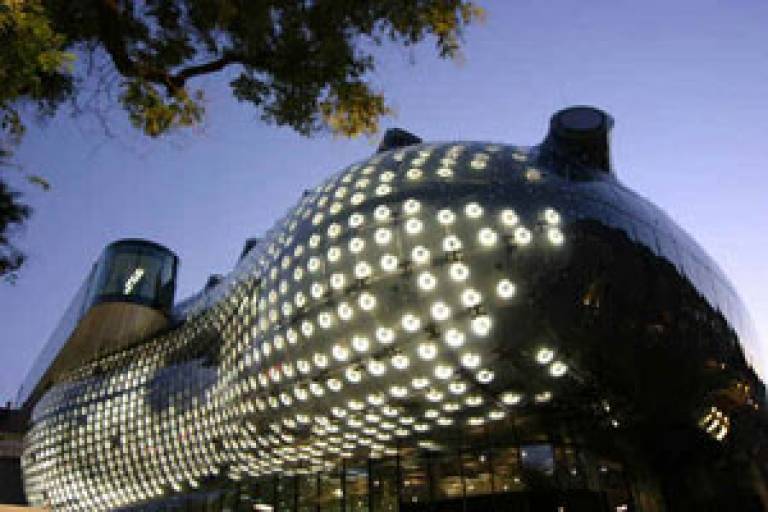 The Kunsthaus' opening coincides with the Austrian town's status as this year's Cultural Capital of Europe. The building, dubbed the 'friendly alien' by Professor Fournier, resembles a giant, irregularly shaped droplet clad in blue plexiglass. Its biomorphic form sits among the historic, densely packed streets of Graz, which was designated a World Heritage Site in 1999.

The skin of the building, designed by Berlin based group realities:united, can become a work of art in itself thanks to a series of fluorescent lights placed between the plexiglass and the steel frame, the effect of which is like a giant TV screen. Professor Fournier stated: "We always wanted the skin to be what we called an 'intelligent skin', not just an enclosure but also an architectural surface which could change."

The droplet rests on a glazed ground floor, out of which rises a 30 metre travolator, known as 'the pin', which takes visitors up to the first exhibition area. Another travolator then carries on to the second exhibition area and the 'needle', a remarkable cantilevered glass box which offers fantastic views of the city. The building is lit, in part, by a series of nozzles protruding from the roof and angled northwards to allow maximum daylight.

The Kunsthaus Graz doesn't have a permanent collection and was developed instead to house international exhibitions of contemporary and modern art. The first exhibition, 'Einbildung - Perception in Art', includes work by Bridget Riley, Max Neuhaus and Elsworth Kelly and will run until January 2004.

To find out more about the Kunsthaus Graz or the school use the links below.