The Double Star Project is China's first purely scientific space mission and its first collaboration with the European Space Agency.

Launched in 2003 and 2004, Double Star was China's first purely scientific space mission and its first collaboration with ESA. One of the Double Star spacecraft orbited the Earth in an equatorial orbit, whilst the the second was in a polar orbit.

Each Double Star spacecraft has a payload consisting of Chinese and European instruments designed to study the magnetosphere and radiation belts. Part of these payloads are the PEACE instruments. These measure the 3D electron velocity distributions of the space plasma around the Earth.

PEACE is one part of a family of particle detectors developed for investigating a range of space plasmas. Instruments based on the heritage of PEACE have been flown on Cluster, Cassini and are proposed to fly on the future Solar Orbiter mission.

The Double Star Project is China's first purely scientific space mission and its first collaboration with the European Space Agency. Double Star is designed for magnetospheric research, using two Chinese spacecraft, TC-1 and TC-2, which each have a payload consisting of both Chinese and European experiments. The TC-1 spacecraft is in a near-equatorial orbit and TC-2 in a polar orbit. The launch vehicle was a Chinese Long March 2C . TC-1 launched successfully on 27 December 2003, TC-2 on 25 July 2004. The Double Star mission was designed with collaboration with ESA's Cluster mission in mind. The mission design allows the six spacecraft together to address science questions that neither Cluster nor Double Star could address alone.

Some of the Double Star science goals (e.g. radiation belt studies) can be addressed with TC-1 and TC-2 alone, but the most exciting science opportunities arise when Double Star works in coordination with Cluster. The two Double Star spacecraft plus the Cluster tetrahedron provide three measurement points separated on a large scale. The clever part is that these three measurement points will be used in ways no previous triad has been used. For example, in late spring 2004 and 2005, TC-1 will search for solar wind entry points at the sunward edge of the magnetosphere, while Cluster (and in 2005, TC-2) are placed to observe any solar wind plasma that enters and reveal how it is changed as it travels towards the Earth's atmosphere. In late summer 2004,  Cluster, TC-1 and TC-2 lie at different distances downstream of the Earth in the magnetotail. Simultaneous observations in these regions will help us to answer the long-standing questions of where, when, and how a substorm begins. These remain unanswered until now because spacecraft have never been properly placed to make the key observations.

MSSL are Principal Investigator institution for the PEACE electron spectrometer team, leading an international team of scientific collaborators. MSSL carried out the work needed to produce two single sensor electron spectrometers from the two sensor Cluster II Flight Spare instrument. Additional work was needed to protect the instruments from the more severe radiation environment that Double Star will experience, and to render the instruments fully ITAR compliant. It is planned that a PEACE Operations Team at MSSL will control the instruments, process their data and carry out in-flight calibration work. 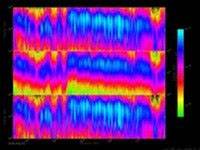 The QSAS data analysis software has been, and continues to be, developed specifically for the analysis and presentation of data from space plasma instruments, specifically those on Cluster and Double Star. QSAS includes a number of tools specifically designed for analysing particle data. As such, we recommend that QSAS is used to analyse PEACE data.