Over the last decade, a number of studies have concluded that there is a strong correlation between solar activity (sunspots, high energy cosmic ray flux) and low altitude cloud cover on the Earth. However, there is no evidence published on the mechanism for this interaction nor on any specific examples to demonstrate these Sun- Earth connections. Utilising data from multiple instruments onboard the NASA STEREO mission, observations of the aurora from the NASA POLAR and observations of cloud formation from 15-minute interval METEOSAT and every 90 minute polar observations from NASA's MODIS, MISR and ESA's MERIS and AATSR, a few case studies will be studied in detail to study the Sun-Earth connections of the effects of CMEs on cloud formation. A simple dynamical model of the CME's passage through the solar wind and the consequent interactions of charged particles with the neutral atmosphere and with water vapour will be utilised to try to emulate key features of the observations from the multiple satellite observations.

In collaboration with the Solar Physics Group.

The GlobAlbedo project will generate an open access validated 15 year record of land surface albedo, which has the potential to be sustained into the future using data from operational European satellites, such as the GMES Sentinels.  GlobAlbedo project will develop a broadband albedo map of the entire Earth's land surface (snow and snow-free), which is required for use in climate modelling and research. An initial group of six users are working with the GlobAlbedo project team to define requirements and drive the project towards practical applications of the products.  The final albedo products will include both black and white sky albedo over the entire globe with at least monthly frequency over the 1995-2010 time period, include uncertainty estimates, and be integrated in three spectral broadband ranges, namely the solar spectrum (400-3000nm), the visible (400-700nm) and the near- and shortwave infrared (700-3000nm). 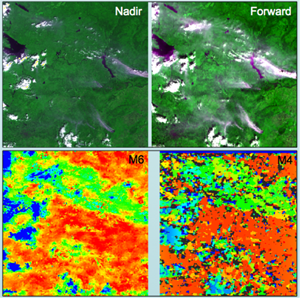 AATSR false colour composites of the nadir and forward together with corresponding stereo-matched smoke, cloud and ground heights [Muller, Fisher and Yerchov, 2010].

Studies of the vertical and horizontal distributions of clouds over a 15 year time period starting in 1997 will be made using products derived from the unique multispectral and multi -look stereo capabilities of the British (A)ATSR(2) instrument. These satellite-derived products will be inter-compared where temporal overlap exists and with other ESA (MERIS) and NASA (MISR and MODIS cloud products) to assess what unique information each product provides and how by combining this unique information, insights into the nature of clouds and their responses to changing levels of CO2 can be better assessed. These satellite-derived products will also be compared against cloud boundary and microphysical information derived from ground-based radars and lidars at the Chilbolton Facility for Atmospheric Radar Research (CFARR) as well as the ARM sites in the central US and in the tropical West Pacific have when comparing continuous profile measurements against 2D first-observable and Australia. This will allow us to assess how representative these sites are of general cloud climatologies as well as what impact time and space sampling characteristics surface ones from satellite.

Cyanobacteria, frequently known as blue-green algae, possessing the ability to obtain energy through oxygenic photosynthesis, have a long evolutionary history suggesting they are one of the oldest known bacterial lineages, with their first appearance dating back around 3-3.5 billion years ago. Contemporary marine Cyanobacteria still play significant roles in terms of global climate and ecosystem. Detection and mapping of marine cyanobacteria using passive remote sensing techniques and fluorescence spectroscopy are the prime target of this research. In addition, understanding fluorescent imaging of cyanobacteria over oceanic regions is required to assess whether airborne or future spaceborne remote sensing techniques could be employed to estimate the total cyanobacterial biomass across large marine areas, how this responds to increased carbon dioxide inputs and in what way this compares to current estimates employing autofluorescence from the MERIS, CHRIS and MODIS satellites. Crude oil in the oceans also plays a crucial role for mapping cyanobacterial biomass as it can be degraded by these microbes. Collaboration with ARGANS has involved the use of optical satellite imagery for oil spill detection.

The co-registration between the forward and the nadir views of the (A)ATSR(2) instruments is known to be poor, with errors on the order of 2 pixels in both the along and across track directions.  This has a number of implications for scientific applications which employ the dual viewing capability; in the case of stereo cloud top height determination, a one pixel shift between the views in the along track direction leads to a 1 km error in the retrieved height.  To correct for the errors in co-registration, an automated tie-pointing and warping algorithm has been developed and is presented in Fisher and Muller (2012). The warping coefficients generated by the study are given below. 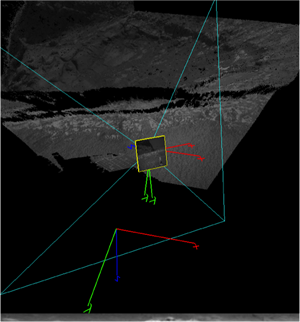 A space rover generally includes multiple stereo sensors to satisfy different engineering and scientific requirements. For example, the NASA Mars Exploration Rover (MER) is equipped with multiple stereo sensors having different optical characteristics (e.g., Field of Views), amongst which the Panoramic Camera (PanCam) and Navigation camera (NavCam) imagery are heavily used for rover navigation and scientific scene analysis, respectively. Therefore, it is worthwhile looking into the potential of the fused data product from stereo pairs taken by different sensors at different positions. This research can also be considered as ground sensor data fusion, in which the core difficulties would be summarised to a) robust stereo matching for wide-baseline stereo pair and (b) optimisation inaccurate rover location. 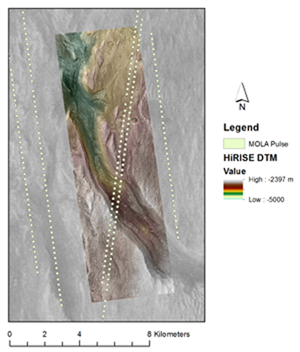 Surface roughness is a useful surface characteristic when considering landing site selection and dust lifting into the atmosphere, and can be calculated using various methods.  One theory suggests that surface roughness information is contained within the time-spread of the received pulse from laser altimetry, and can be extracted by accounting for other pulse-widening effects such as surface slope and instrumentation. 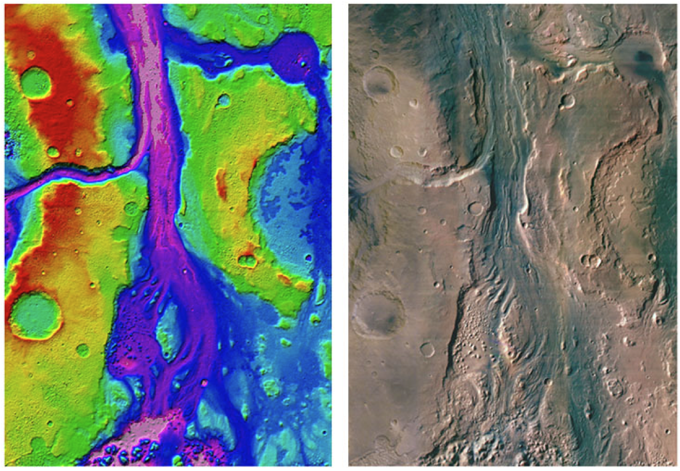 We have developed novel systems for producing very high quality “bespoke” DTMs from orbital imagery at scales from 50-100m (from HRSC), 20-50m (from CTX) and 1-3m (from HiRise). These have been employed by our collaborators at Imperial College and the Open University to dramatically improve our understanding of the formation of sedimentary areas on Mars from the action of water as well as the time history of the action of catastrophic flooding on Mars. These DTMs are now being employed to improve our understanding of Mars surface processes through combining Mars LiDAR data with multi-resolution DTMs for characterising surface roughness. This is critical to finding safe landing sites for future Mars rovers and aerobats.

Provided a well-aligned stereo pair, stereoscopic 3D visualisation can provide the most efficient way to perceive the depth difference. Although it gives the dense and correct depth impression as it is free from the erogenous 3D model construction on which most automated stereo reconstruction methods rely, its scientific exploitation is mostly limited to simple visualisation to date. To extend the usability of the stereoscopic visualisation in remote sensing applications, MSSL has been working on developing a platform/graphic hardware independent stereo workstation in collaboration with JPL. Imaging group also has various stereo display systems which includes high end active and passive stereoscopic displays such as Planar 3D stereo, GeoWall, and Nvidia 3D vision kit.

Five different camera systems are under development in association with the Detections Systems Group: a stereo-pair of thermal IR camera with fish-eye lenses for observing the sky for mapping cloud properties from timescale of 30 seconds to decades to be deployed at the UCL Urban Atmospheric Observatory; the HyperCam1 which employs a very sensitive EMCCD camera together with a Liquid Crystal Tunable Filter (LCTF) for 10nm sampling from 400-1100nm; the HyperCam2 which employs an EMCCD with an Acoustic-Optical Tunable filter (AOTF) for very fine spectral sampling (1.4nm) from 0.4-1µm; the WALI (Wide Angle Laser Imaging) which includes UV LEDs and in future UV laser diode and a Fovean Sigma camera for 3-colour imaging of UV-stimulated fluorescence. 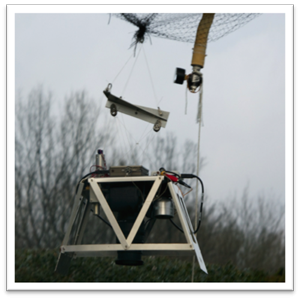 Satellite-based radiometric measurements play a critical role in monitoring the Earth's climate system. Although technology has significantly advanced in the use of onboard calibration and with respect to lunar calibration measurements, there is an underlying need to conduct frequent radiometric calibration campaigns over terrestrial field sites. Up until the present-day such sites are usually located in desert or semi-arid environments and are all bright targets. This simplifies ground logistics and ensures that surface Bi-directional Reflectance Distribution Function (BRDF) can be straightforwardly characterized.  However, although there is substantial interest in bright surfaces (particularly desert, snow and ice), global changes in BRDF/albedo are more likely to occur over dark surfaces. Even with the 14-bit dynamic range instruments launched since 2000 by NASA and ESA, there is an urgent need to ensure that dark surfaces are monitored as well. Apart from volcanic regions, most of these surfaces are likely to be dense vegetation. Logistics for such areas are very difficult due to access, safety considerations and the fact that many such sites are remote. One way of addressing this logistics issue is to monitor from an autonomous un-manned aerobot such as the helicopter system developed by NPL. 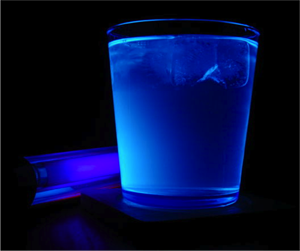 Example of fluorescence from a Gin & Tonic (courtesy of Lewis Dartnell).

The detection of extinct and extant life on the surfaces and atmospheres using remote sensing techniques is currently one of the unique areas of research conducted in the Imaging Group. Employing hyperfine spectroscopic imaging and UV-stimulated fluorescence, our research is focused on determining the limits of detectability of micro-organisms in ice and snow, endolithic and exolithic extremophiles living in rocks as well as life-precursors such as PAHs.

The NASA MISR instrument has been in operational use since March 2000 producing global cloud-top heights and winds. The data processing algorithms were developed by Jan-Peter Muller for NASA. The MISRlite instrument is an uncooled thermal IR version of MISR with 5 angles. A breadboard has been built and a sensor identified for space use which is currently being developed into a multi-angle system for deployment on the ground looking up into space.