One of our ADR work stations:

In addition we have: 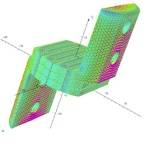