The XMM-OM data reduction pipeline performs a series of diagnostic tests on each source table in order to flag potential quality issues. In this section we describe each quality test in detail. The tests often contain criteria which may appear arbitrary, but these have been converged upon after manual trials and screening of 1000s of individual OM images.

For further information on how the quality flagging differs between filters, and the statistics, please go to Source Properties: Quality Flag Statistics.

In this version of the catalogue images have been stacked to obtain detections of faint sources. Quality maps are also stacked so that if any individual detection is affected by a quality issue it should be flagged.

Each source has 12 columns containing the flags, two for each filter in which it can have a detection: one column giving the flag as an integer, the other as a string. The integer columns are named FILTER_QUALITY_FLAG, where FILTER is either V, B, U, UVW1, UVM2 or UVW2. The string columns are similarly FILTER_QUALITY_FLAG_ST. The integer number is simply the sum of all individual values ΣFi, where i = 1,2,4,..,2048. The string contains 12 letters, each one either an F or T (false or true) for each flag.

N.B. If FILTER_QUALITY_FLAG has a value of zero, there are no quality issues associated with the source and it is therefore assumed to be ok.

The meaning of each bit or flag is summarised here and more details are given below: 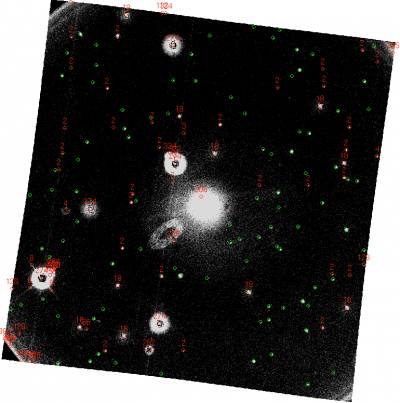 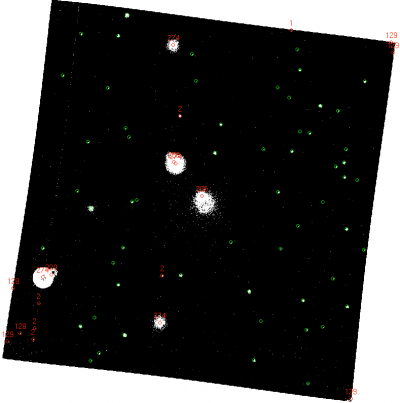 Figure: Images in B filter and UVW1 filter of the SA95 field, showing the detected sources as listed in the catalogue. The green sources have no quality issues. The red sources are labelled with their associated quality flag.

Source on a Bad pixel

An object is flagged bad if the photometric aperture used to sum source counts or background includes a bad pixel, as recorded in the Calibration Access Layer of the XMM-Newton Project. All of these pixels are already stored in the quality map constructed and the information is simply propagated to the source table.

Source on a Readout streak

Readout streaks occur because there is no shutter to block incident photons during the finite time the CCD takes to readout. The exact deadtime is dependent on detector windowing. Streaks occur over a small number of pixel columns, but stretch across all rows of the image, which is the CCD clocking direction during readout. Readout streaks present two problems:

Very bright field sources will bias potentially both the flux and positions of neighbouring sources encroaching upon the readout streak.

Source on a Smoke Ring

Source on a Diffraction Spike

The secondary mirror support vanes give rise to diffraction spikes in the brightest sources which provide undesirable image structure around neighbouring sources and generate spurious sources.

Sources with count rates approaching 1 count per image frame are subject to coincidence loss, which distorts the PSF and gives rise to a modulo-8 pattern in the region surrounding the source. The morphologies of such sources cannot be recovered and hence they are flagged during construction of the catalogue. The rate limit above which this flag is set is about 10 counts per second (depending on framerate) (see Known Issues).

Diffuse light from the sky background reflecting off a chamfer in the detector window housing causes an ring of emission, enhanced by a factor of ~2, in the centre of the detector image. Sources within this region are flagged whether or not the background level is large enough to have a significant effect on the photometry. The reflectivity of the ring reduces with increasing photon energy so this is less prominent in the UV filter images.

Source near a bright source

The structure around bright sources (those with quality bit 4 set) can lead to spurious sources being detected.  Sources detected within 30 arc sec of the bright sources are therefore flagged as 'near a bright source'.

Photometry and astrometry will be compromised if a source is partly outside the imaged area. Sources for which any part of the photometric aperture lies outside the field of view are flagged. Since images covering different areas and lying at different angles can be stacked together, there can be more sources affected by this flag than might be expected.

Source within an extended source

Indicates that the source has an isolated extremely bright pixel within the photometry aperture.

In the case of stacked images, parts of the image can be built up of more exposure time than other parts. Photometry and astrometry will be compromised if any part of the photometric aperture has a different exposure time. This can also occur if data has been lost or corrupted.

The source is too bright