Our research programme at MSSL Cosmology encompasses both early and late Universe cosmology. Here are links to popular pages on some of the themes that we research. 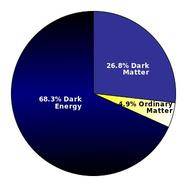 Dark energy is the name given to the phenomenon that is causing the expansion of the Universe to accelerate; an observation confirmed using Supernovae that was awarded the Nobel prize in 2011. Given that the total energy density of the Universe is determined to be close to 1 (in units in which 1 means that the Universe is spatially flat i.e. like a table, not like a balloon) and that the total amount of matter in the Universe has been observed by the CMB and galaxy surveys to account for only approximately 0.3 of this (i.e. approximately 30%), this means that nearly 70% of the Universe is accounted for by dark energy. From a particle physics or fundamental theory perspective there is no good candidate for what dark energy is; it could either be a new type of particle of field, simply a feature of general relativity, or a symptom that general relativity is incorrect. Dark energy therefore is arguably one of the most important and mysterious questions in physics: it accounts for the majority of the content of the Universe, and yet no one knows what it is!

Just as mysterious as dark energy is dark matter. The total amount of matter in the Universe can be determined in a number of ways; either using the CMB in combination with galaxy surveys, or through direct observation of the effect of the total amount of matter through gravitational lensing. Comparing this with the total amount of luminous matter (what we call “Baryons”) leaves a discrepancy: there is more matter than luminous or baryonic matter, about 10 times more on average. The difference, the missing 85% of the mass cannot be made of any of the particles from the standard model of particle physics, and it does not emit or absorb light: it is therefore referred to as dark matter. No one knows what dark matter is, it could either be a new form of sub-atomic particle (perhaps a supersymmetric particle), or it could be a symptom of general relativity being incorrect on galaxy and galaxy cluster scales.

The cosmic microwave background (CMB) is a relic radiation from the Big Bang that permeates the Universe today.  Consequently, the CMB contains a wealth of cosmological information.  Observations of the CMB have been instrumental is establishing the recent era of precision cosmology, where cosmological parameters are constrainted to high-precision.  In particular, full-sky CMB observations made by NASA’s WMAP and ESA’s Planck satellites have played a critical role.

When studying phenomena beyond cosmological concordance it is useful to do so in the context of a well-motivated cosmological model; for example, the homogenous but anisotropic Bianchi models. In these models the assumption of isotropy about each point in the Universe is relaxed, yielding more general solutions to Einstein’s field equations. Another example is the global topology of the Universe.  General relativity is a local metric theory and so may make predictions about the local curvature of the Universe only. The global topology of the Universe is left unconstrained.  For both of these examples the cosmic microwave background (CMB), the relic radiation of the Big Bang, is a powerful probe that may be used to distinguish between various scenarios.

Symmetry breaking phase transitions in the early Universe may have lead to the creation of topological defects. Cosmic strings are one particular type of defect, where axial or cylindrical symmetry is broken, leading to line-like discontinuities in the fabric of the Universe. Although we have not yet observed cosmic strings, we have observed string-like topological defects in other media, such as liquid crystals (see image). Note that cosmic strings are distinct to the fundamental superstrings of string theory. However recent developments in string theory suggest the existence of macroscopic superstrings, which could play a similar role to cosmic strings.

Spacetime about a cosmic string is conical. Consequently, strings moving transverse to the line of sight induce line-like discontinuities in the cosmic microwave background (CMB), the relic radiation of the Big Bang. The detection of cosmic strings from CMB observations would open a new window into the physics of the early Universe. 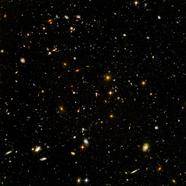 During recombination photons and baryons decoupled, neutral atoms formed, and the Universe became transparent to light for the first time, releasing the cosmic microwave background (CMB).  Following this epoch the Universe consisted largely of neutral hydrogen and, although transparent, was essentially dark.  This epoch, known as the Dark Ages, lasted for hundreds of millions of years.  Following the Dark Ages the Universe reionised as the formation of the first luminous objects ionised the surrounding neutral hydrogen.

A large international effort is underway to detect the 21cm line emission of neutral hydrogen from the epoch of reionisation.  This signal has the potential to provide a wealth of cosmological information, giving a window into the period when the first cosmic structure formed.  However, the 21cm signal is very weak and its detection challenging.  Large radio interferometric telescopes are currently under design and construction, such as LOFAR and the SKA, which will attempt to detect the 21cm signal from the epoch of reionisation for the first time.

The following are the members of the Astrophysics Group who are involved in Cosmology research.