MSSL leads the consortium that built and operates the EUV Imaging Spectrometer (EIS) which provides plasma diagnostics in the solar chromosphere, transition region and corona. 2006 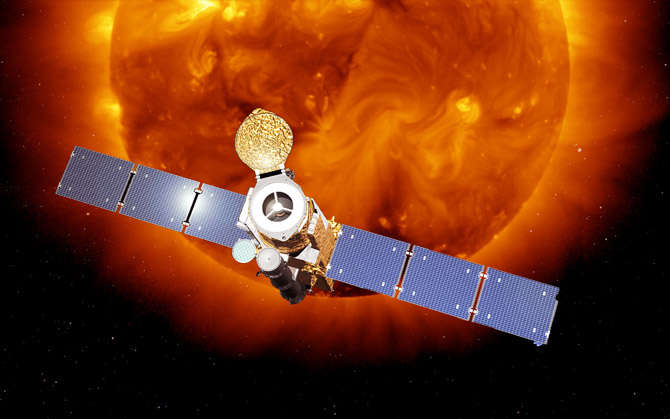 The Solar Observing Satellite Hinode mission will study the generation, transport, and dissipation of magnetic energy from the photosphere to the corona and will record how energy stored in the sun's magnetic field is released, either gradually or violently, as the field rises into the sun’s outer atmosphere.

Although capable of generating images, the primary function of Extreme Ultraviolet Imaging Package is to measure the flow velocity, or speed of solar particles, and diagnose the temperature and density of solar plasma -- the ionized gas that surrounds the sun, its corona and beyond. The Extreme Ultraviolet Imaging Package provides a crucial link between the other two instruments because it can measure the layers that separate the photosphere from the corona -- an area known as the chromosphere and the chromosphere-corona transition. The spectrometer was developed by the Mullard Space Science Laboratory of the University College London in the United Kingdom and the Naval Research Laboratory in Washington. Major spectrometer elements were developed in the United Kingdom under the direction of Mullard's Professor Leonard Culhane, who is the principal investigator for the Particle Physics and Astronomy Research Council who is funding the investigation in the United Kingdom. Supporting Culhane in the development of the instrument’s optical systems and with the scientific analysis is the principal investigator, Dr. George Doschek of the Naval Research Laboratory.

FPP is the focal plane package for the Solar Optical Telescope (SOT), which is a diffraction limited aplanatic Gregorian with an aperture of  0.5 m providing angular resolution  of  ~0.2 arcsec over the field-of-view of  ~400 x 400 arcsec.

FPP consists of a filter vector magnetograph (FG) and a spectro-polarimeter (SP). This combination allows the acquisition, for the first time, of a continuous series of high-precision vector magnetograms, Dopplergrams and filtergrams with sub-arcsec resolution.

Lockheed Martin Solar and Astrophysics Laboratory (LMSAL) is responsible for producing FPP. In a follow-on to the GOES-SXI collaboration, LMSAL have again placed a subcontract with MSSL to manage the procurement of Marconi CCDs and perform additional CCD characterisation.

FPP will use three custom designs of CCD, as follows:

The Extreme Ultraviolet Imaging Spectrometer (EIS) is being built by a consortium led by MSSL and will fly on the Japanese Solar-B mission, due for launch in August 2006.

Solar-B will study the magnetic fields in the photosphere and related these to the highly dynamical behaviour of the transition region and corona. There are three instruments aboard Solar-B; the Solar Optical Telescope (SOT) which will observe the photosphere and the corona in optical light and will also measure solar magnetic fields using a vector magnetogram, the X-ray telescope (XRT) which will observe the corona, and EIS. EIS will obtain EUV spectra and images of plasma from the transition region through to the corona and solar flares. High spectral and spatial resolution is required to enable accurate determination of plasma characteristics such as temperatures, densities and velocity flows.

The CCD camera for EIS is being developed here at MSSL. (The CCDs for SOT are being procured on behalf of Lockheed Martin from Marconi and will be characterised here at MSSL before delivery).

The camera will consist of two CCDs at the focal plane, to cover two separate wavelength ranges. The CCDs selected are Marconi (formerly EEV) 42-20s. Brief details of the CCDs and the camera are given below, to find more about the camera design, follow the links below this table.