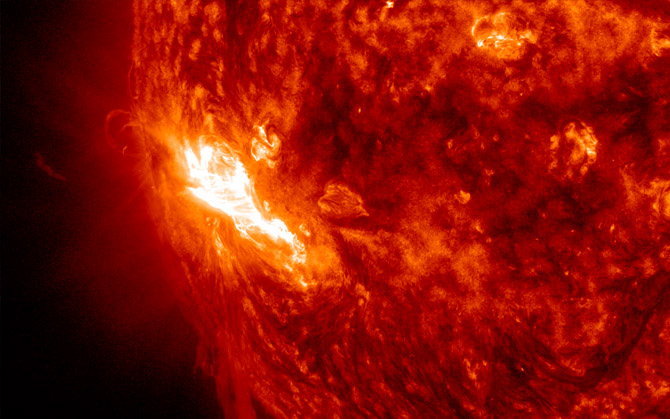 MOSES is an acronym for the Multi-Order Solar EUV Spectrograph. MSSL is involved in the project in two main ways.

The Solar and Stellar Physics Group at the UCL Mullard Space Science Laboratory (MSSL) will have their eyes even more firmly on the sky than usual with the launch of the Multi-Order Solar EUV Spectrograph (MOSES) on 31 January 2006.

The rocket launch is an experiment to test the concept of slitless multi-order spectroscopy. Traditionally, spectrographs can only capture images of the sun in narrow slices, one at a time, then move onto the next ‘slice’. Therefore, the last image taken of one side of the sun could be taken several hours after the first, making the interpretation of time-varying events such as solar flares cumbersome for researchers.

The ability of MOSES to obtain measurements of a ‘full disk’ image in a single exposure as well as high quality spectral information will allow scientists to decipher the flows, temperatures and densities of the solar material.

MOSES will be launched from the White Sands missile range, New Mexico, on a sounding rocket provided by NASA. Sounding Rockets provide the opportunity to get experiments above the Earth’s atmosphere giving a clear view of the Sun. The flight will only be 12 minutes long, and the entire experiment only five minutes long, while the rocket is at its highest point.

During that time, MOSES will be pointed towards the same area of the sun as the Coronal Diagnostic Spectrometer (CDS) aboard the SOHO satellite, currently orbiting the sun and used by scientists all over the world. By comparing the results from MOSES with data received from SOHO, the research team can be sure of accuracy.

The flight will reach a height of around 300km, allowing for data collection above 160km, where atmospheric absorption is no longer significant. At this point, MOSES will make precise measurements of the Extreme Ultraviolet (EUV) light coming from the sun, which is impossible to measure from the ground a EUV cannot penetrate Earth's atmosphere.

Dr Louse Harra from the UCL Solar and Stellar Physics Group said: “This experiment is highly significant for the future of solar imaging, and will be pivotal for exploring the source of explosions from the Sun that produce space weather effects. The technique is being sought after for future international space missions’