On the 8th April 2020 ESA and the Climate Science community celebrated 10 years of successful operations of the CryoSat mission. But for the dedicated team of scientists and engineers at UCL-MSSL the story goes back much further than the launch date in April 2010. 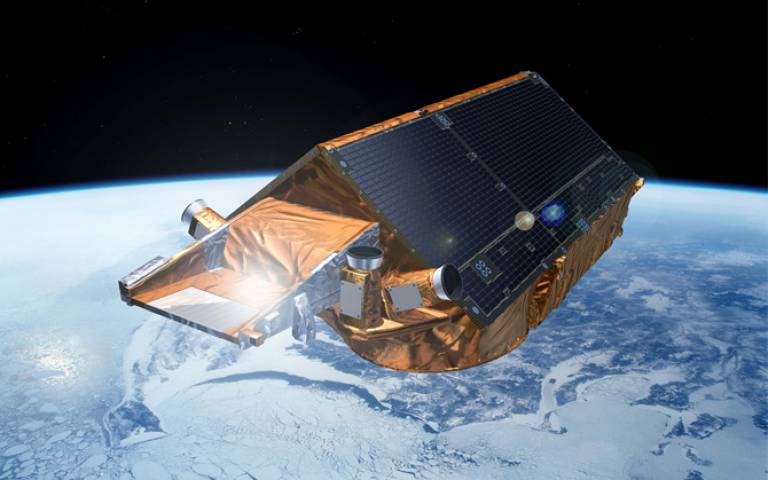 In 1997-98 staff at MSSL supported an ESA-sponsered proof-of-concept study into a High Spatial Resolution Radar Altimeter (HSRRA).  This study investigated a proposed dual-antenna Radar Altimeter system capable of operating in a Synthetic Aperture mode (SAR) and an interferometric SAR mode (SARin) and using a ‘Delta-Doppler’ processing method to achieve a synthetic beam formation. This technique allowed a much higher spatial resolution than traditional Pulse-Limited Radar Altimeters.  Our numerical simulations demonstrated and quantified the improvements that such an instrument and processing technique could achieve in measurement precision and coverage. [1] (Wingham & Baker, 1998)

In 1998 ESA issued a call for proposals for the first in a series of “Earth Explorer” missions. MSSL’s work on HSRRA  supported the winning proposal, led by Prof. Wingham, for the CryoSat mission. The CryoSat project was launched the following year.  From 1999 MSSL software engineers developed the CryoSat Mission Performance Simulator (CRYMPS), and from 2001 we also began development of the data-processing chains for the operational Instrument Processing Facility (IPF).

CryoSat was completed in record time and launched from the Plesetsk Cosmodrome in October 2005. Unfortunately the mission was lost when the 3rd stage of the launcher failed to separate.  Because the importance of the mission was widely recognised, the decision to fund a rebuild was strongly supported by the science community, by politicians across Europe and by ESA.   Less that 4 months later the work on a new, improved CryoSat-2 began. The new satellite was successfully launched from Baikonur on 8 April 2010 with a nominal lifetime expectation of 3 years, and has been in continuous operation ever since.

Measurements from the last 10 years have helped to quantify the loss in sea ice volume in the Arctic and have shown that the ice lost from the Greenland ice sheet has risen to an estimated 254 billion tons per year while the losses from the Antarctic ice sheets are ~125 billion tons per year.  More importantly, CryoSat has helped to show that these mass losses are accelerating as the global climate continues to warm.

Today the MSSL team continues to support the mission as an ESA-designated Expert Support Laboratory: providing operational monitoring http://cryosat.mssl.ucl.ac.uk/qa/ and developing processing improvements that are delivered to the operational IPF. 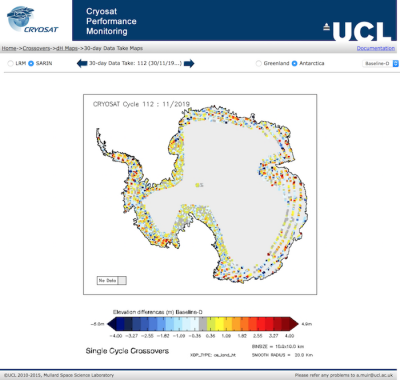 Meanwhile research scientists from UCL's department of Earth Sciences, working in the Centre for Polar Observation and Monitoring (CPOM), continue to analyse the growing dataset and characterise the effect of climate change on polar regions. Their operational sea ice monitoring can be seen at http://www.cpom.ucl.ac.uk/csopr/seaice.html. Results from Ice Sheet monitoring are at http://www.cpom.ucl.ac.uk/csopr/icesheets2/

CryoSat's birthday was going to be celebrated at the “CryoSat 10th Anniversary Science Conference” later this month but this event has been postponed until October due to the coronavirus pandemic (see www.cryosat10years.org)
The CryoSat-2 spacecraft's health remains good and we look forward to a few more years of data acquisition as we continue to map the accelerating changes to Earth’s cryosphere.