Saturn’s moon Titan is of special interest due to many of its Earth-like features such as lakes, a methane cycle similar to the hydrological cycle on Earth and large atmospheric organic molecules 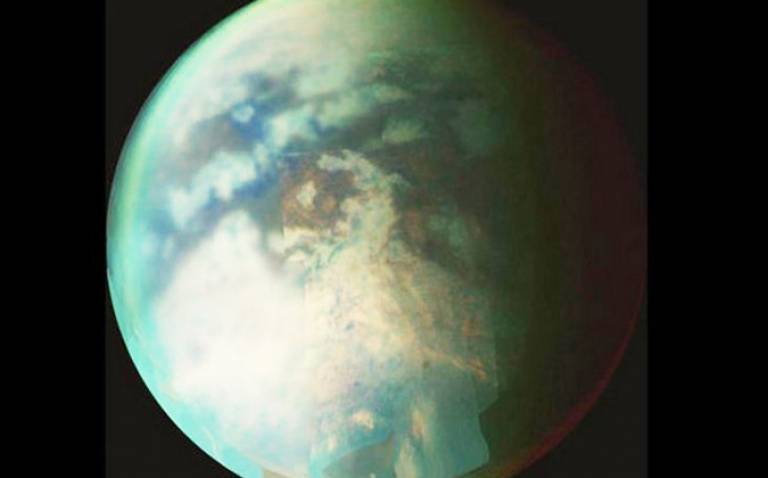 Saturn’s enigmatic moon Titan is of special interest to scientists due to many of its Earth-like features such as lakes, a methane cycle similar to the water (hydrological) cycle on Earth and large organic molecules in its atmosphere. Titan is the only moon in the solar system with a substantial atmosphere and it is larger than the planet Mercury.

One difference to our planet is that Titan does not have a significant magnetic field. As a result, Titan's dense atmosphere interacts directly with Saturn's magnetic field and the plasma and energetic particles in Saturn's space environment - its magnetosphere. The magnetic field dragged along by this plasma drape around Titan’s conducting ionosphere, resulting in a complex magnetic environment.

In a recent study we have used electrons to learn more about this complex environment. When Titan's nitrogen rich atmosphere is exposed to light from the Sun, molecules of nitrogen are ionised releasing electrons which we call photoelectrons. The sunlight which ionises the nitrogen can either be from what is called the solar continuum, or from discrete spectral lines produced by particular ions in the atmosphere of the Sun. One particularly intense line is the Helium II line at 30.4 nm, in the ultraviolet region of the electromagnetic spectrum, which produces photoelectrons with an energy of 24.1 electron volts (eV). The Cassini Plasma Spectrometer (CAPS) has an instrument called the electron spectrometer (ELS) which is designed to detect these photoelectrons and we find them in Titan's lower ionosphere where the density of nitrogen is very high.

In our study we found some of these 24.1 eV photoelectrons at high altitudes in Titan's upper ionosphere and also further away in Titan's magnetic tail. They are unlikely to be created at such large distances from Titan because nitrogen density is too low at these distances. Our interpretation is that these photoelectrons originate in the lower ionosphere on the sunlit (dayside) ionosphere of Titan where the nitrogen density is sufficiently high. They then travel along magnetic field lines to the locations where they are observed. Therefore these photoelectrons can be used to trace the magnetic field lines and aid in mapping the magnetic environment of Titan. 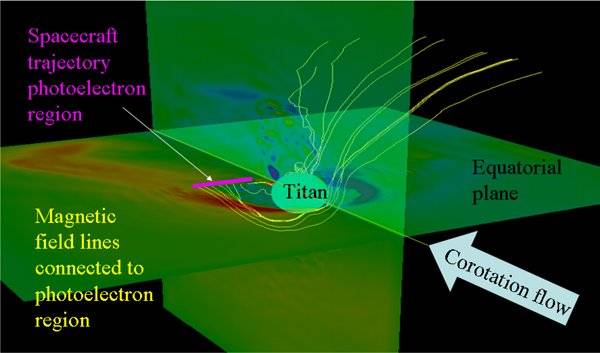 In the figure above we show the results of a computer model applied to a flyby of the Cassini spacecraft past Titan - flyby T15 in July 2006. The pink line is the part of the spacecraft trajectory where 24.1 eV photoelectron peaks were observed. The yellow lines are magnetic field lines connected to this region, showing that there is a magnetic connection to the lower sunlit ionosphere. Only magnetic field lines connected to this region are shown.