A UCL-led research team has developed a novel CAR T therapy for T-cell acute lymphoblastic leukaemia (T-ALL) after identifying a new marker unique to the disease. Following promising lab results, the team plan to take the therapy to clinic with human trials to start next year. 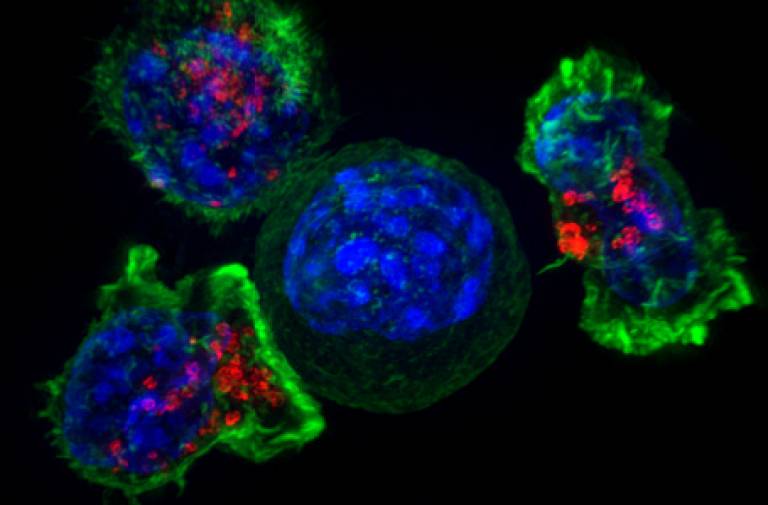 In the study, recently published in Blood, researchers looked for surface receptors present on malignant T-cells, but not normal T-cells, and found what appears to be an ideal candidate - a receptor known as CCR9. The team then trialed a new CAR T therapy that could home in on this receptor and kill the cancerous cells.

CAR (Chimeric Antigen Receptor) T-cell therapy - where patient’s own immune T-cells are genetically engineered to recognise and kill their own cancer cells - has been one of the biggest breakthroughs for blood cancers in recent years, especially in the treatment of B-cell acute lymphoblastic leukaemia (B-ALL).  This technology has saved the lives of many patients who would have otherwise succumbed to their disease and is now approved on the NHS. In B-ALL, most CAR T-cell approaches target a marker on the surface of leukaemic cells called CD19.

However, T-ALL, which tends to be more aggressive and difficult to treat than B-ALL, does not express CD19 on its surface. T-ALL is much trickier to target as most markers present on cancerous T-cells are also on normal ones.

Finding a new target for T-ALL

“Attempts to find a marker on T-ALL cells that is specific to the disease and not expressed on normal T-cells has been extremely challenging. This is vital because otherwise the CAR T cells would kill themselves (something known as fratricide) or would wipe out the patient’s own normal T-cells, which would dangerously compromise their own immune system,” explains Professor Marc Mansour, Professor of Paediatric Haemato-Oncology at UCL, and corresponding author of the study.

As the study team started to investigate, they came up with an intriguing hit – a receptor called CCR9. “This surface-expressed marker on T-ALL is unique to the disease and not expressed on T-cells or other normal tissues. CCR9 is expressed in the majoroity of T-ALL cases, and most importantly in 80% of cases that relapse,” says Professor Mansour.

The next stage of the research was to engineer a CAR T cell that could recognise CCR9: “We developed a CAR T-cell against CCR9 and found it was highly effective in eradicating T-ALL in mice without obvious toxicity. It worked really nicely, even in T-ALL cells with barely detectable CCR9,” says Dr Paul Maciocia, Clinical Senior Research Fellow at UCL and first author.

‘Because T-ALL is relatively rare, there has been little investment from pharmaceutical companies in developing new treatments for this disease. At relapse, there are very few options for both children and adult patients, lagging far behind the array of new immunotherapies now available for B-ALL. Hopefully this new CCR9 CAR T-cell will go some way towards closing the gap.’ concludes Professor Mansour.

The team now has funding from the MRC to take this to a Phase I clinical trial which is planned to open in 2023.