The Joel Lecture 2020 took place on 17th February 2020. The event celebrated 100 years of the Joel Chair of Physics Applied to Medicine. Giving this year's Joel Lecture, former Head of Department Prof Jem Hebden reflected on his own adventures in medical physics. Seen through the lens of his "Desert Island Docs" – a selection of eight papers that impacted Jem's career – he considered how his career thus far has been influenced by the pioneering works of other scientists. 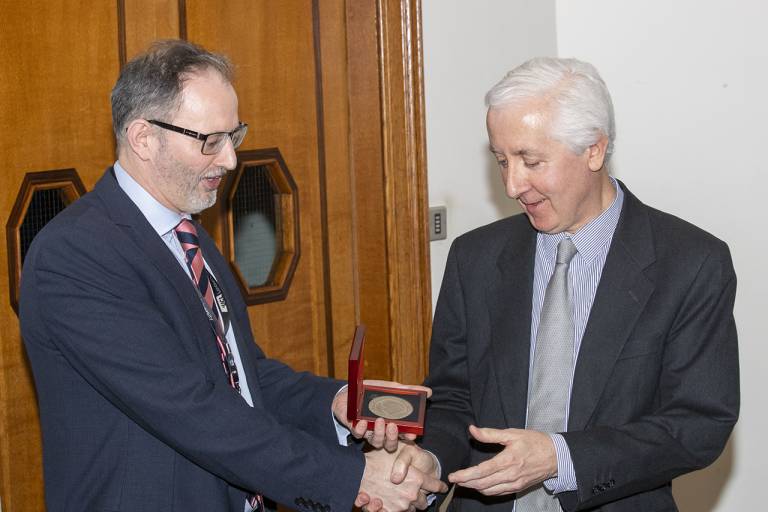 Above: Jem Hebden (right) was presented with a commemorative award for his Joel Lecture, by Head of Department Andy Nisbet (left)

The lecture was introduced by the current holder of the Joel Chair, Prof Robert Speller. Robert has held the Chair since 2011, when he introduced the Joel Lecture as an annual event to highlight outstanding contributions in the field of medical physics by our academics. The Lecture is customarily opened by Robert with a brief history of the Joel Chair, describing how it was established with a bequest by the Joel Barnato family to establish the Joel Chair of Physics Applied to Medicine at Middlesex Hospital.

“The Middlesex Hospital Medical School was established in 1835 and became a part of the University of London following the request from a group of senior clinicians at the hospital. In 1912, as a significant donation was bequethed to the hospital by the Joel Family, the case was made for a physicist to be added to their ranks. At the time, major advances were being made in cancer treatment witht the use of physics, and the Middlesex Hospital was a leading exponent.
As a result, in 1920 Sidney Russ was the first established Joel Chair. This is the reputed to be the first such Chair in the world and effectively started the academic field of medical physics. Today, 100 years on, we gather to celebrate this event.
– Robert Speller, Joel Chair

This year was no different, but nevertheless set apart by the fact that 2020 marks 100 years since the establishment of the Chair. As such, the Joel Lecture celebrated with a special Centenary Edition of the event, introducing two additional speakers from the Department's PhD student cohort to highlight some of the current research activities in the Department future leaders in the field.

Above: Photos of the Joel Lecture speakers

Savvas Savvidis, speaking on his work in guiding tissue engineering of an oesophagus using x-rays, was introduced by his PhD tutor and Royal Academy of Engineering Chair in Emerging Technologies, Prof Sandro Olivo. Sandro described Savvas as an inquisitive and challenging PhD student who has developed an "amazing ability to interact with the medical community", an ability which is central to the work of the Department.

Watch Savvas talk, including Sandro's introduction, in this video:

The second PhD talk came from Elena Tran, who outlined her work on respiratory motion models for radiotherapy treatments with MR-linac. Her PhD tutor Dr Jamie McClelland told the audience in his introduction that response from industry partners, recognising the importance and relevance of Elena's research and methodological approach, had been one of his "proudest moments".

You can watch Elena's talk and the introduction from Jamie in the video below: 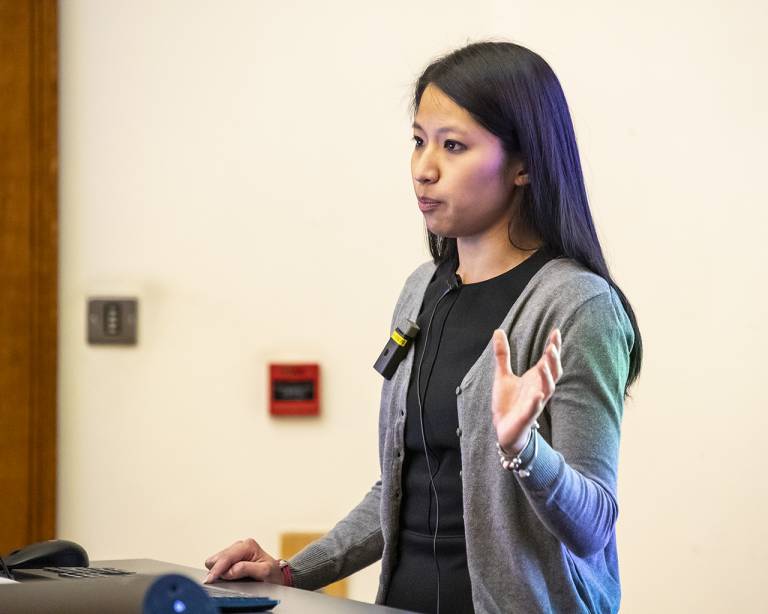 Above: Elena Tran speaking at the Joel Lecture

The event was followed by a reception in the Roberts Engineering Building Foyer, attended by a mix of guests from the Department, across UCL, and external institutions.

See photos from the reception:

Medical Physics and the Joel Chair