Abbie C. Bray is a PhD student in Physics and Astronomy, Lead Co-Ordinator of the UCL Women in Physics (WiP) Group and Co–Organiser of the Atto Fridays Seminar Series 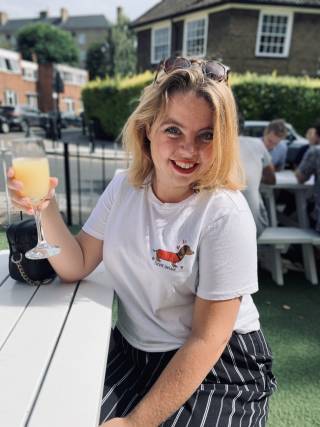 Abbie's PhD is on Strong Field physics, in particular Attosecond science, and she is a theoretician. There are many parts to what she does, but she enjoys improving a current theoretical model and highlighting its strength in comparison to other models since it includes some physics fundamentals that others do not.

Abbie started her PhD at UCL in October 2018, after completing her Physics MSci at Queen Mary University of London, where her thesis was on 2D Conformal Field Theory. The change in how she used her mathematical skills was based on “getting to see evidence”. Within her current field there are experiments and very elegant uses of complicated maths, which she loves.

When Abbie joined UCL she was “buddied” with Dr Lia Li (Founder and CEO of Zero Point Motion Ltd), who at the time held the lead co-ordinator position in the WiP Group. As her career progressed, Lia decided it was time to step down and passed on the mantle. Abbie previously had experience in EDI and outreach, as well as event organising, so the job didn’t seem too out of her wheelhouse!

All Event/Organisation and Co-ordinating I do for the department is unpaid and voluntary - It’s in my own time. Which is both a blessing and a curse… It’s great as I spend minimal time during “researching hours”, maybe an odd email here and there or a quick chat, but I do give up an evening or so a week for EDI and outreach. I do EDI work not for glory and especially not to make UCL look better, but for my past colleagues who struggled due to biased systems, for my current colleagues fighting to be heard and for future generations - may it be a bit easier for them. The WiP group isn’t just for Women and Women’s issues – it’s so rare that we have had an event for just women. We are here as an established group to give the platform to all forms of intersectionality and members of minority groups. I am passionate about EDI as I believe our community and academic culture needs to change. I am proud to be made of many different intersectionality groups. The one “I’m most known for” is being from a diverse social and economic background – I am thoroughly working class and proud.

By co-ordinating the group, I am by no means an expert in anything and that’s why I invite everyone to come talk for us. I just facilitate the learning and make posters celebrating our diverse community in the Mathematical and Physical Sciences. I find it hard to invite speakers as I always worry that this is “Abbie’s choice”, not what’s best for the community, so I like to go on suggestions! Please feel free to write to me with suggestions of events/speakers or volunteer yourself. What I will say is that co-ordinating is very different to being the guest at events. I have to constantly make sure I am up to date with the latest issues and statistics and try not to let too much of my opinion creep into introductions I give in my session (I save that for the discussion!). I have the responsibility to make sure all voices and stories are heard in fair way and that people aren’t being used or tokenised like so many other groups/organisations do.

Out of my humble budget I will always pay my speakers. A simple gesture you might think… No. In this community it is those who are marginalised who have to do the leg work whilst also balancing work, life and everything in between. Since they are the ones who are affected by systematic racism/classism/ageism/sexism/discrimination and unconscious bias, why on earth do they need more stress preparing a talk? It is exhausting baring our souls in order to try make effective change. So, we have to be careful on what our motives are when we ask someone to do EDI work. Do we want to feel “good” that we’ve given someone a platform, or do we genuinely care about the issue and want to learn how we can help by improving our behaviours and thought processes? There’s a difference between being an ally and implementing effective change and it comes down to how you act on the information given to you.

Historically, the WiP group has combined forces with other groups/individuals for bigger events (Wikithons, staff training, etc) as well as hosting lunchtime talks and supporting inaugural lectures. Since Covid-19, they’ve had to adapt to this virtual age, holding twitter takeovers and inviting others to do the same. The group also started their “lunchtime talks” again - this time they are in the evenings and via Zoom. The group have had various talks on a variety of subjects including:

· “Equality Vs Equity” by Priyanka Dasgupta

· “Hidden Spectrum: How the story of autism forgot women and what we can do about it” by Lucy Hogarth

· “Lives in an out of Physics – personal and historical look at nonstandard career paths” by Dr. Susan Pyne

Abbie has also been asked to be a panel member on an event about Women in Physics for pre-university students to help combat stereotypes, and to explain why organisations such as the UCL WiP group are still needed. Most recently she teamed up with Outreach Co-ordinator Dr Mark Fuller and UCL Careers to host a panel event where she brought together a range of people with unusual and surprising jobs following a STEM degree. This was to help and inspire undergrads and anyone looking for a career change during these uncertain times. For the meantime, she will continue to host talks online and work with others for larger scale events. She feels it is important to share resources and give platforms to all by creating a safe space within the community where all voices can be heard and listened too.

Abbie is Irish – British and grew up in Oxford. Despite being in the OX1 postcode, it wasn’t all dreaming spires.

As much as I love the city, there was a weird vibe growing up. There was very much a divide between “town” and “gown” but also within the townies themselves. Over the years, part of this “vibe” has been realised as racism directed towards me for being something other than British. Moving to London was relief really, there was more of every type of person and I began to see possible “future-selves” the more interactions I had. I have always been independent and self-sufficient (especially because Oxford is expensive), so I had no bother moving here and I believe it was very much needed too! I have settled in East London close to where my adoptive grandpa grew up during the war. I like the absolute diversity in my community and history on every road.

While Abbie works to avoid stereotypes, she admits that she does live up to a few.

I adore trains and collect vintage TFL memorabilia. I have “delighted” my research group with a few train related quizzes and constantly bore my friends with train facts. I also play lots of boardgames (mostly online now) and Magic: The Gathering. My biggest hobby, and also some additional scientific research (no joke), goes into alcohol science and neurogastronomy. I have my own still and a lab book full of cocktail recipes and other interesting results! Recently, I have been exploring how artichokes change how we taste. I adore London and some of my most favourite places are tube stations and spots on the Thames… Although, when restrictions lift, you'll catch me in the Historic Pubs in East End on sunny afternoons or having a boogie to some Techno in Hackney Wick at night.

If you have a suggestion or you would like to give a talk, please feel free to contact Abbie at the email address below.