A black hole simulation by UCL scientist Dr Ziri Younsi was revealed today in a special stamp collection and coin cover by Royal Mail to celebrate the 200th anniversary of the Royal Astronomical Society (RAS). 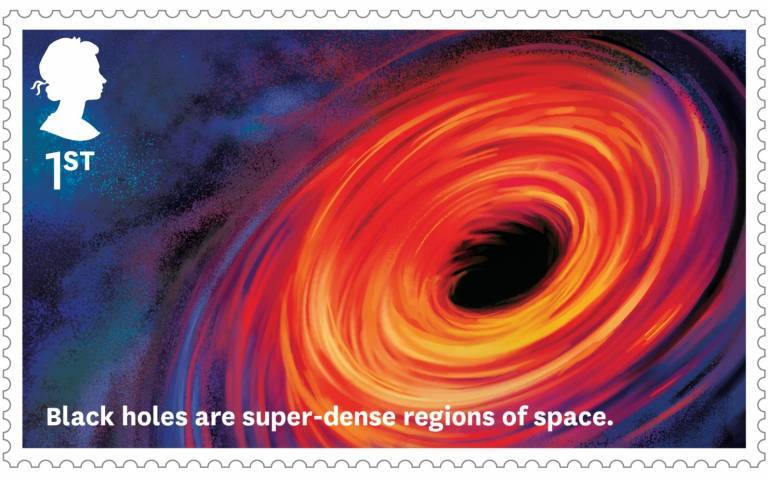 Dr Younsi is part of the Event Horizon Telescope collaboration team who successfully captured the image of a black hole in a world first last year. He used computer models from his research to inform the design of the stamp illustration, which was created by artist Robert Ball.

“It’s been a pleasure working with Robert Ball and Royal Mail to translate my research into a vibrant and dynamic first class stamp. Although they are relatively simple cosmic objects, supermassive black holes are also extraordinary, having enormous masses yet extremely compact sizes. They dramatically affect their environments by warping spacetime and super-heating any surrounding material. What you see here is the electromagnetic radiation produced by a disc of super-heated material around a spinning supermassive black hole,” explained Dr Younsi (UCL Space & Climate Physics).

The ‘Visions of the Universe’ stamp issue features eight illustrations of astronomical phenomena discovered or investigated by astronomers and astrophysicists, which extol Britain’s contribution to discovery and understanding in this field.

Included in the set are: Cat’s Eye nebula; geysers on the moon Enceladus; black holes; pulsars; Jupiter’s auroras; gravitational lensing; Comet 67P; and the Cygnus A Galaxy. Indeed, many of the discoveries featured in the set involved scientists from UCL through the Cassini and Rosetta space missions.

Britain has a long and rich tradition of astronomical investigation, from the discovery of celestial objects, such as the planet Uranus by William Herschel in 1781, to pioneering observational techniques such as radio interferometry pioneered by Sir Martin Ryle in the mid-20th century.

Philip Diamond, RAS Executive Director, said: “This striking and attractive set of stamps reflects the drama of the universe around us. I'm delighted that our bicentenary year is marked by a genuine collector's item combining tradition with contemporary science.”
Philip Parker, Royal Mail, said: “These vivid and beautiful new stamps celebrate the UK’s contribution to our understanding of the Universe, from geysers erupting from one of Saturn’s moons to the extraordinary nature of Black Holes.”

The stamps will be available on general sale at 7,000 Post Offices across the UK from Tuesday 11 February.

The black hole simulations by Dr Younsi also feature as cover art on an accompanying limited edition 50p coin depicting a black hole struck by The Royal Mint in 2019 in honour of Professor Hawking who dedicated his career to the universe and its secrets.

Black holes are areas of space where the density of matter is so great that nothing can escape the gravitational pull. Their existence was first suggested in 1783 by English natural philosopher John Michell, and their behaviour was mathematically described in 1916 by the German physicist Karl Schwarzschild. Yet they seemed so unorthodox that astronomers were initially reluctant to believe they could truly exist. Only in the 1960s were black holes accepted, which led to a flurry of theoretical investigations.

In 1974, Stephen Hawking made key predictions about black hole behaviour. His calculations showed that subatomic particles could escape a black hole in certain circumstances. Over long periods of time, this would lead to the black hole ‘evaporating’. As yet, no one has seen an evaporating black hole, but Hawking’s theory is widely believed. Hawking was awarded the Royal Astronomical Society’s Gold Medal in 1985.