Key components for a massive optical digital camera onboard the European Space Agency’s Euclid space telescope have been delivered by astronomers and engineers from the UCL Mullard Space Science Laboratory. 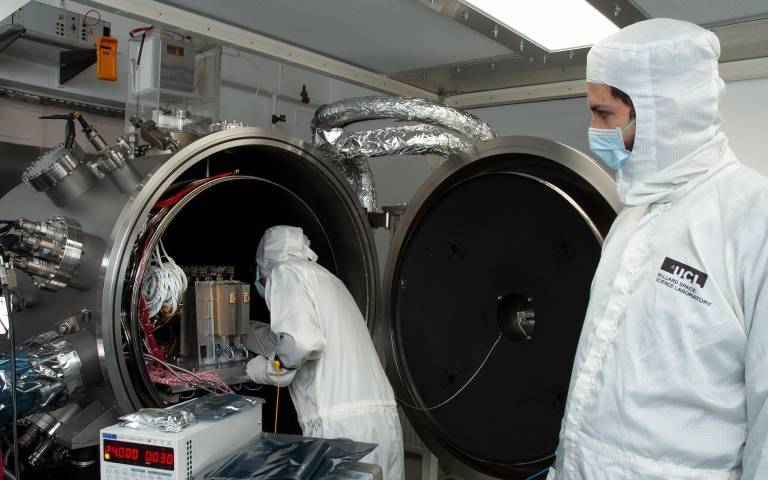 Once Euclid is launched from French Guiana in 2022, it will be one of the largest such cameras put into space and will capture light from distant galaxies, providing a more detailed look at the visible universe over a larger part of the sky, than ever before.

Euclid will survey the shapes of galaxies and map the geometry of the Universe with the aim of making accurate measurements of mysterious Dark Matter and Dark Energy, which make up most of the cosmos.

To map the Dark Matter that is believed to make up 27% of our Universe, Euclid will measure fractional distortions that it imprints on the shapes of galaxies. For this, the VISible camera on Euclid will detect billions of galaxies to measure the effect over different parts of the sky to an accuracy of 0.03%.

Professor Tom Kitching (UCL Mullard Space Science Laboratory), said: "Observations of Dark Matter are wonderful in themselves but even better is that Euclid can also see the effects of Dark Energy, a mysterious ingredient that appears to be driving the accelerated expansion of the Universe."

Dark Energy accounts for 68% of the Universe, and its effects can be measured by examining how the Dark Matter map has changed with time by looking at more and more distant galaxies.

As Dark Energy drives an accelerated expansion of the universe, it works against gravity, causing Dark Matter to build up in clumps across the map. By examining the rate of clumps forming, physicists can work out how much Dark Energy there is, and how it is evolved, and therefore something about its nature.

"No-one yet knows what Dark Energy is, but Euclid will bring us much closer to answering this mystery. Euclid will be the most powerful facility to make these investigations,” added Professor Kitching.

Funded by the UK Space Agency, UCL is leading a team of collaborators from across Europe working on the Flight Model VIS camera, which is one of only two instruments on board Euclid. Separately, through the leadership of University of Edinburgh, the UK Space Agency is funding leading parts of the Euclid data segment, which will analyse the Euclid images.

Professor Mark Cropper (UCL Mullard Space Science Laboratory), leader of the VIS camera team, said: "The VIS camera can take pictures of the sky which are more than 70 times larger than those captured using the Hubble Space Telescope and, over six years, it will image half the sky and reach out to the distant parts of the Universe. We anticipate that the publicly available Euclid dataset will be a treasure trove for astronomers for decades to come, allowing everyone to stare anywhere in the Cosmos with Hubble-like clarity.”

The telescope system with the VIS camera is built to be incredibly stable and to take very sharp high-resolution images in order to measure the shapes of galaxies with sufficient accuracy. Each frame from the VIS instrument is more than 600 Megapixels, and images will be collected every 15 minutes. Following several years of development by the UCL scientists and engineers, the VIS camera team has delivered 36 CCD detectors each with four channels of electronics to turn the image captured in space into digital information that can be beamed to Earth, marking a major milestone in the development of the instrument.

The underpinning electronics took more than ten months to produce with Matra Electronique in France and Teledyne/e2v in the UK, and the assembly, test and calibration of the 144 detector channels was recently completed in specialist facilities at UCL MSSL and at ESA to ensure they survive the cold environment of space.

Christine Brockley-Blatt (UCL MSSL), Project Manager for the VIS instrument, said: “The design, development, manufacturing and calibration of the 144 detector channels to a stringent specification as achieved by UCL MSSL staff in all engineering disciplines has been a complex part of the VIS project. That the final performance exceeds our expectations is a tribute to their expertise, dedication and professionalism. We have also benefitted from the support of the VIS team across Europe, the UK Space Agency, and by ESA."