This weekend scientists across the UK are celebrating Space Weather Days to highlight the hazards that solar activity can pose to satellites in orbit, from those providing telecom, weather and navigation services, to those providing infrastructure on the ground. 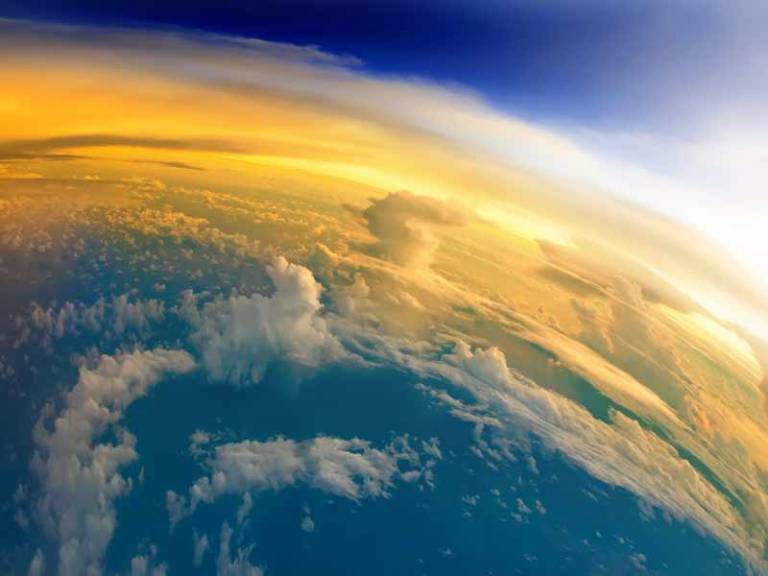 UCL's Mullard Space Science Laboratory carries out a wide range of research in the area of space weather. From looking at how the Sun produces the most energetic eruptions and explosions in the Solar System to studying how these events drive processes such as the aurora and ultimately cause disruptions to our satellite services, communications and electricity distribution.

Popularised in the 1990s, the term “Space Weather” describes the conditions in space, near the Earth, governed by the Sun’s constant release of charged particles known as the ‘solar wind’. Periods of peak solar activity give rise to what are called ‘severe space weather events’, where the Sun produces phenomena such as solar flares and coronal mass ejections (CMEs) that interact with the Earth’s upper atmosphere and surrounding magnetic field, often to dramatic effect.

Professor Louise Harra, Head of the Solar Physics Group at MSSL, is currently working on Hinode (a Japan/US/UK space mission) as Principal Investigator for the Extreme-Ultraviolet Imaging Spectrometer (EIS). Built by an MSSL-led consortium, the EIS measures the flow velocity of solar particles, as well as the temperature and density of the solar wind.

“Hinode, which means sunrise in Japanese, has been described as the Hubble telescope of the Sun,” says Harra. “It observes the surface of the Sun in great detail, seeing where magnetic fields have been created and how those produce the activity that we see.”

“Solar flares are very fast releases of energy across pretty much the whole electromagnetic spectrum, while coronal mass ejections are these huge bursts of mass and magnetic field.”

Together, Harra explains, the two phenomena are the most dramatic aspects of space weather in terms of their effect on Earth. “Solar flares happen quickly and they’re very energetic, so you will get an impact from one within tens of minutes potentially. You’ll get particles accelerated to close to the speed of light that can come and hit the near-Earth environment.

“Coronal mass ejections take a couple of days to get here, but, again, those can have a big effect in the near-Earth environment where there are spacecraft orbiting the Earth.”

And should solar flares or CMEs reach Earth, a different scientific skillset will be required. This is where Dr Robert Wicks, joint lecturer at MSSL and the UCL Institute for Risk & Disaster Reduction, comes in.

“We have a lot of expertise in space physics, the activity of the Sun and its impact on the Earth at MSSL,” he says. “But at MSSL we generally don’t have a huge amount of expertise in resilience, planning and risk — IRDR does have such expertise. So I’m trying to form that link to enable us to be leaders in the UK on preparedness and resilience for space weather.”

MSSL is also involved with a European Space Agency (ESA) mission to help reduce the global risk of damage caused by space weather, which will be worked on by teams from across the UK with UCL playing a pivotal role in developing instruments on board the spacecraft.

The Lagrange mission would have a ‘side view’ of the Sun and provide advance warning hours or days before solar active regions – often the source of energetic flares or CMEs – rotate into view of Earth. MSSL is leading the development of a set of instruments to assess the environment around the Lagrange spacecraft, including a sensor that will measure the charged particle plasma ejected by the Sun.

In 2017 UCL launched their first satellite, CubeSat, which will orbit from between six months to two years at a height of 375 - 500 km.

Dr Anasuya Aruliah (UCL Astrophysics) who will be analysing the data collected from UCLSat, explained: "Scientifically this is a unique experiment. For the first time we will have several months of simultaneous measurements of the thermosphere from many locations. We hope for detailed investigations of how solar flares and the solar wind influence the dynamics and chemistry of the upper atmosphere, and the risk to satellites and technology."