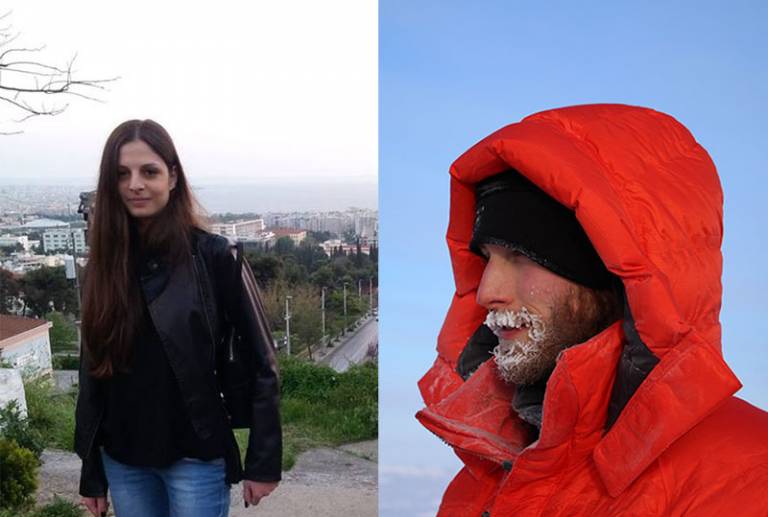 The 2016 Postgraduate Research Prize was awarded to Thomas Armitage for his outstanding achievements in his PhD in Earth Sciences.

"Tom successfully undertook several research projects during his PhD, resulting in four first-author publications in prestigious international journals (as well as one publication as co-author), with a further two articles currently in review. In his thesis, Tom generated sufficient material for 3 or 4 additional papers and overall his PhD research has paved the way for several novel and exciting avenues of research.
The Arctic Ocean sea level data produced during his PhD and Postdoc are of significant interest to the Arctic oceanographic and climate monitoring communities, revealing shifting patterns of freshwater distribution and changing upper ocean circulation in the Arctic. More generally, his depth of knowledge of the remote sensing techniques used to characterise Earths terrestrial and marine ice and the polar oceans allowed him to make important advances in the field.

"During his PhD, Tom co-organised and participated in two field campaigns, designing a ground-based radar experiment aimed at improving the understanding and interpretation of satellite data over Arctic sea ice. In spring 2014, he joined an international team of researchers on a sea ice camp in the central Arctic Ocean, north of Greenland, and he took part in a research cruise aboard the Finnish Research Vessel Aranda in the Bay of Bothnia in spring 2016.
During the spring 2014 campaign, Tom curated a blog and his photograph, 'Halo of the Sun', was awarded an Honorouble Mention in the UCL Research Images as Art competition and was selected to represent the 'Global challenges' theme of the UCL 2034 20-year strategy. His work analyzing satellite data over Antarctica generated media attention, appearing on the BBC News and European Space Agency websites, and his photographs have accompanied articles about Arctic sea ice on the BBC News website and elsewhere. In April 2016 he gave a public talk to the Blackheath Scientific Society on observing the oceans from space and he has prepared an article for publication in Ocean Challenge magazine on Arctic oceanography."

In his response to being awarded the prize, Thomas Armitage stated:

"I would like to express my gratitude to the Faculty of Mathematical and Physical Sciences for awarding me the Faculty prize for postgraduate research. I have found working on developing and utilising satellite measurements to expand our knowledge of Earth's rapidly changing polar regions immensely rewarding, and it is an honour to receive this recognition of my work. I have been lucky enough to enjoy the support of some excellent scientists, both within UCL as well as across the UK and international polar science community, to whom a significant portion of this prize should be credited. I would in particular like to acknowledge the support of UCL Earth Sciences over the course of my PhD, as well as colleagues at the University of Leeds, the National Oceanography Centre, Southampton, and the European Space Agency."

The 2016 Postgraduate Taught Prize was awarded to Ekaterini Katsouri for her impressive work in her MSc in Mathematical Modelling during the last academic session.

"Ekaterini Katsouri possesses an exceptional combination of skills making it easy for her to master new concepts and apply them immediately in novel research. She has by far exceeded expectations for a Distinction level on the Mathematical Modelling MSc programme, making her the best student in many years in competition with 1st class graduates from top UK and overseas Universities. Her research project is of the level of a high quality publication which is again a testament of her unique ability."

Prof. Robb McDonald, Head of the Department of Mathematics, said:

"The MSc in Mathematical Modelling typically admits 16-20 students highly-qualified students annually. Standards are very high and that Ekaterini was one of the very top performing students for many years is outstanding. Her project in mathematical biology (modelling dynamics of the Zebrafish circadian clock), which uniquely combined mathematical modelling with experiments and analysis of experimental data, was remarkable for an MSc student in mathematics."

"I am honoured and thankful for this prize. Living in London and studying at UCL was a wonderful experience that I will always cherish. I would like to thank my fellow students and academic staff for this unique experience. My dissertation which focused on modelling the dynamics of the circadian clock enabled me to expand my knowledge in mathematical modelling and to gain insight into the biology of circadian clocks. Circadian clocks are a crucial part of the organism: they are associated with many physiological and behavioural processes, therefore, it is important to study them from a therapeutic perspective. This could not be achieved without the guidance and support of my supervisor, Professor Alexey Zaikin, and Professor David Whitmore whom I also thank for the opportunity he gave me to observe his work in the laboratory. Finally, I would like to thank my parents for their unconditional love and support."

The Dean's Commendations are a newly introduced element to these awards and were presented to the following students: