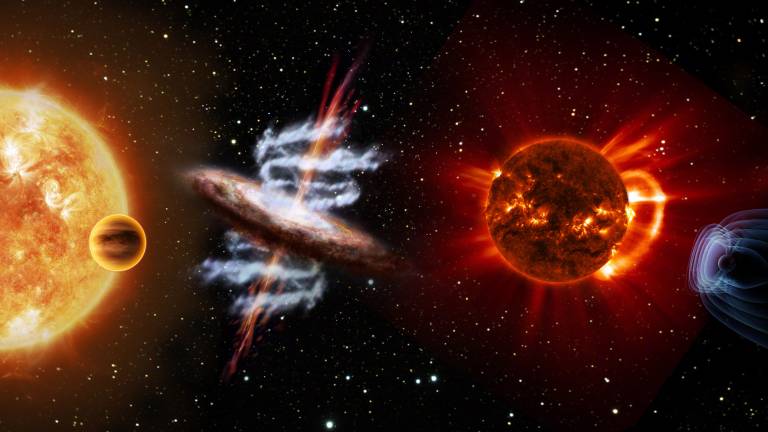 The European Space Agency has announced the shortlisted proposals for its next mid-sized science mission.

All three proposed spacecraft have significant contributions from UCL, which means the university will be guaranteed a role regardless of which is chosen. The candidates are in the areas of exoplanet science, plasma physics and X-ray observations of high-energy phenomena, with teams including academics at UCL Mullard Space Science Laboratory and UCL Physics & Astronomy.

The spacecraft is designed to observe the properties of the light coming from around 500 star systems known to have planets orbiting them. As the planets pass between their parent star and Earth, Ariel will pick up the fingerprint their atmospheres leave in the infrared portion of their starlight.

Thor (Turbulence Heating ObserveR) is a proposal to build a spacecraft that studies plasma (electrically charged particles) and turbulence in the diffuse gas of space. UCL's contribution is to one of the key instruments that Thor is expected to carry: an electron analyser, which will be built in partnership with NASA's Goddard Space Flight Center. Christopher Owen (UCL Mullard Space Science Laboratory) is jointly leading the development of the instrument, with Dhiren Kataria (also UCL MSSL) also participating.

The instrument, called the Electron Spectrometer Analyser, will be based on a similar piece of instrumentation that UCL has developed for Solar Orbiter, a solar physics probe which is currently under construction.

Thor will answer questions including how plasma is heated and particles accelerated and how the energy is dissipated in different conditions. The electron analyser will provide very high resolution measurements, providing unprecedented data about the behaviour of very fast-moving electrons in plasmas.

Xipe (X-Ray Imaging Polarimetry Explorer) is a planned spacecraft that will measure the properties of X-rays coming from distant high-energy astronomical objects.

X-ray observations have made huge progress in the past decades. Although they are hard to focus (as they simply pass through or get absorbed by conventional lenses or mirrors), X-rays can now be made into images, and their energies can be measured using spectroscopy. However Xipe is the first instrument to measure their polarisation - the orientation of the electromagnetic waves that make them up.

Measuring the polarisation of X-rays will allow astronomers to probe the properties of X-ray sources, such as white dwarfs, pulsars and supernova remnants, gleaning information about their emission mechanism and the orientation of the sources. It will also shed new light on quantum electrodynamical effects and help to probe fundamental physics.

UCL scientists are playing key roles, both in the science teams and in the development of the mission payload. In particular, the university's researchers will participate in the design and construction of the focal plane assembly and filter wheels, leveraging expertise developed in similar roles on missions including ExoMars, Swift and XMM-Newton. Silvia Zane (UCL Mullard Space Science Laboratory) is a member of the Science Study Team and is coordinating the UK involvement in the mission's instrumentation, with MSSL's Kinwah Wu a member of the scientific team and Berend Winter the leading mechanical engineer.

The three missions were shortlisted for the M4 mission of ESA's Cosmic Vision programme, expected to launch in the mid 2020s.