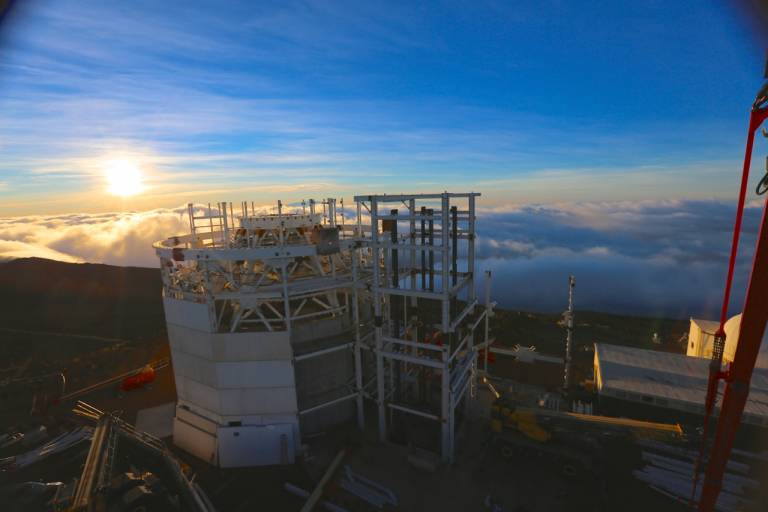 A consortium of UK institutes including UCL's Mullard Space Science Laboratory, Andor Technology plc, and the Science and Technology Facilities Council, is investing £4.5M to develop cameras for the instruments on DKIST.

DKIST is a $300M telescope, funded by the US National Science Foundation and being constructed by the US National Solar Observatory on the Haleakala mountain in Maui, Hawai'i. With a 4-metre diameter primary mirror, the telescope will resolve features as small as 30 km on the surface of the Sun, and conduct high-speed (sub-second timescales) spectroscopic and magnetic measurements of the solar photosphere, chromosphere and corona. Its spatial resolution is equivalent to resolving a £1 coin at a distance of 100 km. DKIST - which will see first light in 2019 - is poised to address fundamental questions of solar magnetic field generation and dissipation, solar variability, atmospheric structure and dynamics which are at the core of key UK solar physics research programmes.

The consortium of UK institutes in DKIST is led by Queen's University Belfast (QUB), and includes Armagh Observatory, Northumbria University, UCL, and the Universities of Glasgow, Sheffield, St. Andrews and Warwick. It will oversee the development and delivery of the cameras, and take the lead in supporting the UK solar physics community in their use of DKIST by providing a set of processing tools for DKIST data, synthetic observations to validate diagnostic approaches, and support for developing observing proposals.

Dr Sarah Matthews of UCL's Mullard Space Science Laboratory said, "MSSL has a long heritage in the area of camera development for astronomical imaging and spectroscopy, and is delighted to be helping to deliver these ground-breaking new cameras for a ground-breaking new facility. The origin and evolution of the solar magnetic field, and its role in controlling the dynamics of the solar atmosphere, are at the core of the MSSL solar group's science interests, critical for understanding the origins of solar activity and how it drives space weather. DKIST will provide unprecedented observations that will really help unlock the physics that drives those interactions."

Sunrise over the DKIST construction site in Hawaii, December 2014