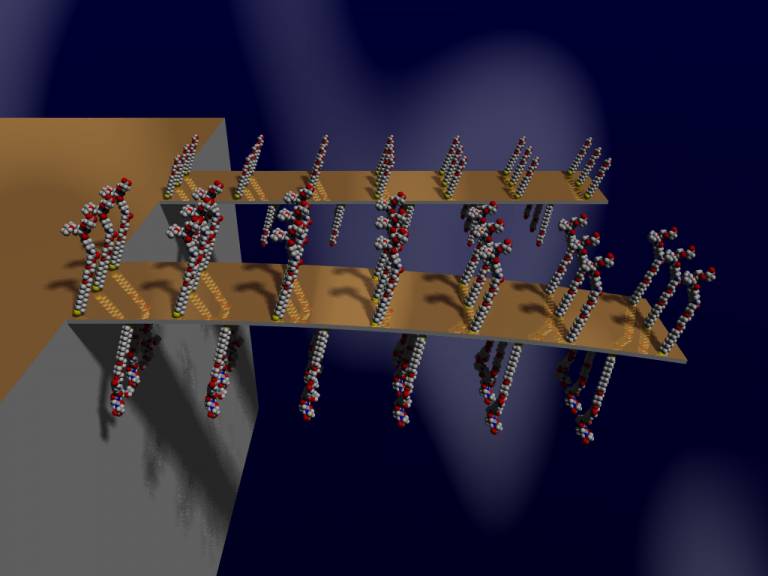 Miniaturized tests can revolutionize the speed of diagnosing diseases, according to new research from UCL.

The study, published in Nature Nanotechnology and led by Joseph Ndieyira (London Centre for Nanotechnology at UCL) refines a promising experimental technology for diagnostic devices. The team, which includes several LCN researchers, developed ultrasensitive sensors that can assess antibiotic efficacy, haemophilia and HIV infections within minutes. The sensors take the form of tiny cantilevers, less than the width of a human hair, coated with molecules similar to those found in bacterial cell walls, mini-antibodies raised against HIV proteins and anti-clotting antibodies.

These cantilevers can be tuned to be sensitive to different molecules: in this study, they were sensitised to the antibiotic Vancomycin, the proteins present in the HIV virus, or blood anti-clotting factors (for haemophilia). When one of these substances is present, the properties of an appropriately coated cantilever's surface are affected. This gently bends the cantilever, quickly and accurately revealing the molecule's presence.

This new method will allow the development of rapid point-of-care tests that can make a definitive multiple diagnoses of infections, identify the resistance profile of causative organisms in parallel on the same device and make the tests suitable and cost effective for use in a primary care situation, such as a clinic.

Meeting these challenges requires quicker and easier diagnostic tests, so that appropriate treatments can be chosen. The team believes that their technology can cut the time delay between tests, results and repeat appointments, which hinders public health efforts to tackle new threats.

The research is published this week in a paper entitled "Decoupling competing surface binding kinetics and reconfiguration of receptor footprint for ultrasensitive stress assays", in the journal Nature Nanotechnology.

A cantilever bends as the molecules on its surface react with a pathogen. Credit: Ndieyira et al.