Astronomers discover the most distant galaxy in the Universe 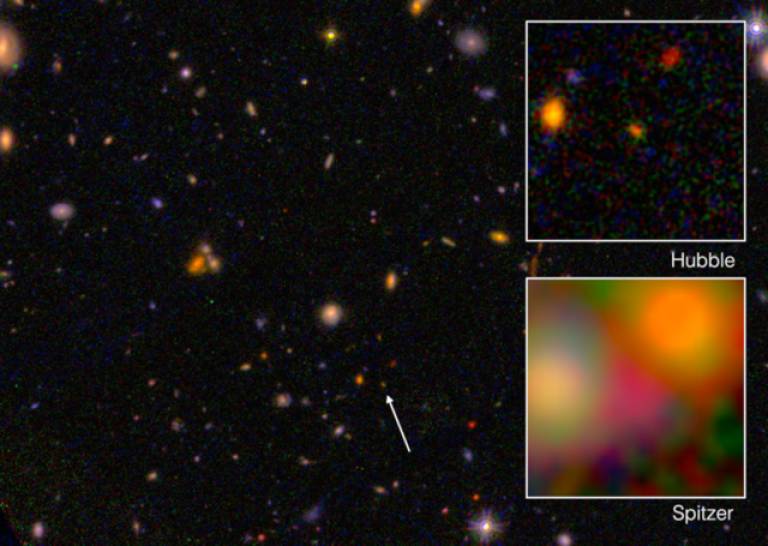 An international team of astrophysicists has successfully measured the most distant galaxy ever recorded, by observing its characteristic hydrogen signature in the early Universe.

The galaxy, called EGSY8p7, was initially identified by UCL graduate student Guido Roberts-Borsani using the Hubble and Spitzer Space Telescopes. The galaxy's record-breaking distance was subsequently confirmed by a team of astronomers using the WM Keck Observatory in Hawai'i. The galaxy is so far away that we observe it at a time when the Universe was just over 4% of its current age, less than 600 million years after the Big Bang.

"This is a time when we believe the first galaxies were formed and had a considerable effect on the evolution of the Universe. Finding galaxies at such an early age is rare and provides us with a unique insight into the conditions that allowed these objects to form. We are looking at the very first moments of galaxy formation," says Roberts-Borsani, a co-author of the confirmation paper.

Because light takes time to travel, when astronomers look into the depths of space they are in fact looking back in time. The largest and most powerful telescopes, like the 10m Keck I telescope on Mauna Kea (Hawai'i), let scientists see objects that are fainter, more distant and hence further back in time. This distance is measured in 'redshift' because the expansion of the Universe stretches the light waves as they travel towards us, making distant objects appear redder. Higher redshifts correspond to a younger Universe. However, there is a limit to how far back astronomers can look: the early Universe was shrouded in a fog of dark hydrogen gas, which rendered it opaque to the ultraviolet radiation of the first galaxies. It may be that this galaxy, which is abnormally bright and appears to consist of extremely hot stars, was able to clear the surrounding fog more quickly than other galaxies, the team says. 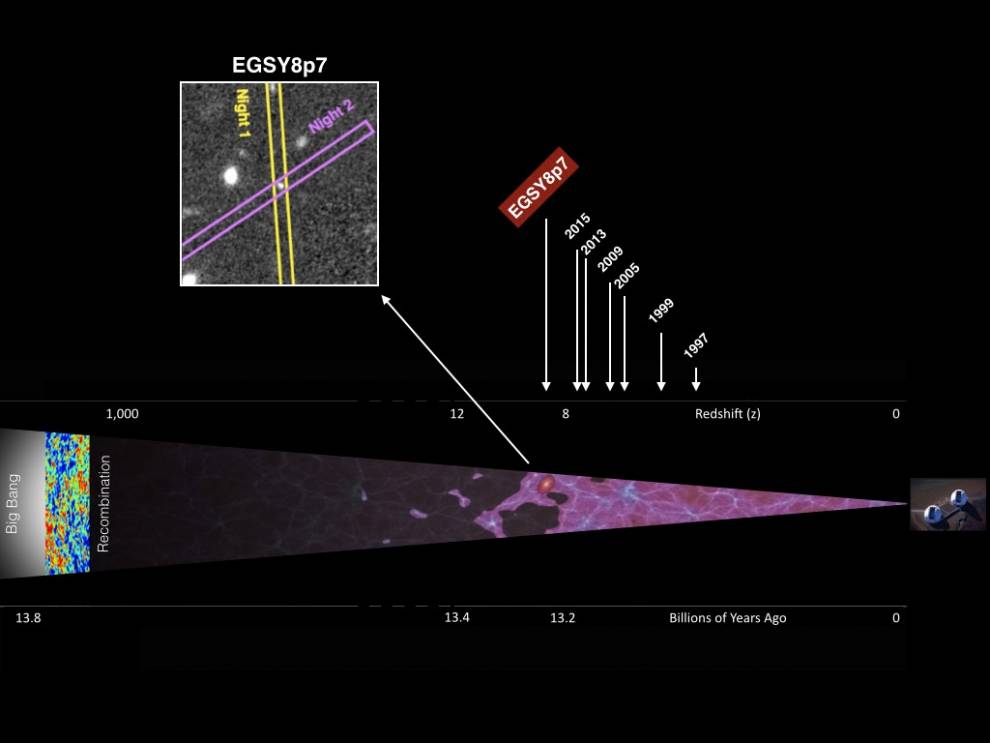 Very few galaxies have been spotted at these early times, known as the 'epoch of re-ionisation' by astronomers, because the wavelength of light at which they are brightest, known as 'Lyman alpha', is absorbed by the surrounding hydrogen. Identifying such galaxies, therefore, requires space- and the most powerful ground-based telescopes to detect their signatures.

"We used wide-field optical and infrared images taken by the Hubble Space Telescope and the Spitzer Space Telescope, and used their combined power to pre-select candidates we thought to be the brightest and most distant galaxies," explains Roberts-Borsani. "Although the images contain hundreds of thousands of galaxies, we can segregate the most distant candidates and make initial estimates of the redshift by comparing their relative brightness through different filters."

These estimates require follow-up spectroscopic observations with telescopes such as Keck I, which break down the light into its component colours to give a more precise distance measurement. Out of four galaxy candidates found by Roberts-Borsani, three have had their distances confirmed with the Keck spectrograph, providing three of the four most distant star-forming galaxies known to date, including EGSY8p7. By confirming EGSY8p7's distance, the team of astronomers have observed the farthest galaxy yet and are providing valuable insight towards understanding when the first galaxies were birthed into the Universe.

Richard Ellis concludes: "The period of cosmic re-ionisation is the final missing piece in our overall picture of the evolution of the cosmos. While it's exciting that we can push back the frontier to a time when Universe was less than 5% of its present age, the importance of the present discovery is that detailed studies of exceptional objects like EGSY8p7 can offer new insight into how the first galaxies formed."

The paper confirming the galaxy's distance is led by Caltech astronomer Adi Zitrin, and has been accepted for publication in the Astrophysical Journal Letters.

The work was funded in part by NASA.