Chemistry of seabed's hot vents could explain emergence of life 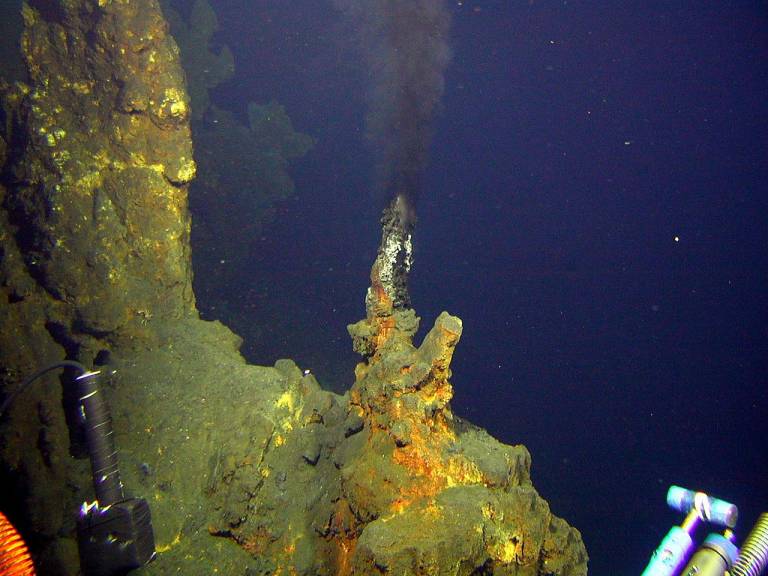 Hot vents on the seabed could have spontaneously produced the organic molecules necessary for life, according to new research by UCL chemists.

The study shows how the surfaces of mineral particles inside hydrothermal vents have similar chemical properties to enzymes, the biological molecules that govern chemical reactions in living organisms. This means that vents are able to create simple carbon-based molecules, such as methanol and formic acid, out of the dissolved CO2 in the water.

The discovery, published in the journal Chemical Communications, explains how some of the key building blocks for organic chemistry were already being formed in nature before life emerged - and may have played a role in the emergence of the first life forms. It also has potential practical applications, showing how products such as plastics and fuels could be synthesised from CO2 rather than oil.

"There is a lot of speculation that hydrothermal vents could be the location where life on Earth began," says Nora de Leeuw, who heads the team. "There is a lot of CO2 dissolved in the water, which could provide the carbon that the chemistry of living organisms is based on, and there is plenty of energy, because the water is hot and turbulent. What our research proves is that these vents also have the chemical properties that encourage these molecules to recombine into molecules usually associated with living organisms."

The team combined laboratory experiments with supercomputer simulations to investigate the conditions under which the mineral particles would catalyse the conversion of CO2 into organic molecules. The experiments replicated the conditions present in deep sea vents, where hot and slightly alkaline water rich in dissolved CO2 passes over the mineral greigite (Fe3S4), located on the inside surfaces of the vents. These experiments hinted at the chemical processes that were underway. The simulations, which were run on UCL's Legion supercomputer and HECToR (the UK national supercomputing service), provided a molecule-by-molecule view of how the CO2 and greigite interacted, helping to make sense of what was being observed in the experiments. The computing power and programming expertise to accurately simulate the behaviour of individual molecules in this way has only become available in the past decade.

"We found that the surfaces and crystal structures inside these vents act as catalysts, encouraging chemical changes in the material that settles on them," says Nathan Hollingsworth, a co-author of the study. "They behave much like enzymes do in living organisms, breaking down the bonds between carbon and oxygen atoms. This lets them combine with water to produce formic acid, acetic acid, methanol and pyruvic acid. Once you have simple carbon-based chemicals such as these, it opens the door to more complex carbon-based chemistry."

Theories about the emergence of life suggest that increasingly complex carbon-based chemistry led to self-replicating molecules - and, eventually, the appearance of the first cellular life forms. This research shows how one of the first steps in this journey may have occurred. It is proof that simple organic molecules can be synthesised in nature without living organisms being present. It also confirms that hydrothermal vents are a plausible location for at least part of this process to have occurred.

The study could also have a practical applications, as it provides a method for creating carbon-based chemicals out of CO2, without the need for extreme heat or pressure. This could, in the long term, replace oil as the raw material for products such as plastics, fertilisers and fuels.

This study shows, albeit on a very small scale, that such products, which are currently produced from non-renewable raw materials, can be produced by more environmentally friendly means. If the process can be scaled up to commercially viable scales, it would not only save oil, but use up CO2 - a greenhouse gas - as a raw material.

The study is published in a paper entitled "Bio-inspired CO2 conversion by iron sulfide catalysts under sustainable conditions" by Roldan et al., in the journal Chemistry Communications.