Illuminating illumination: what lights up the universe? 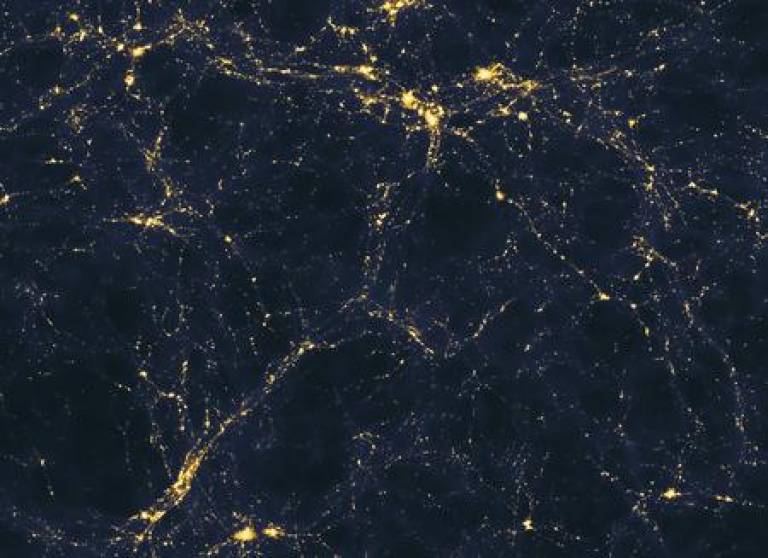 New research from UCL shows that we will soon uncover the origin of the ultraviolet light that bathes the cosmos.

A full understanding is long sought-after, because the intensity and distribution of the light changes everything from galaxies that trace dark matter to scraps of gas that probe dark energy. UCL cosmologists Andrew Pontzen and Hiranya Peiris (both UCL Physics & Astronomy), together with collaborators at Princeton and Barcelona Universities, have shown how forthcoming astronomical surveys will reveal the illuminating sources. Their study is published today in the Astrophysical Journal Letters.

"Which produces more light? A country's biggest cities or its many tiny towns?" asks Andrew Pontzen, lead author of the study. "Cities are brighter, but towns are far more numerous. Understanding the balance would tell you something about the organisation of the country. We're posing a similar question about the Universe: does ultraviolet light come from numerous but faint galaxies, or from a smaller number of very bright quasars?"

Answering this question will give us a valuable insight into the way that the universe built its galaxies - the places where stars and planets are born, live and die. It will also help scientists properly calibrate their measurements of dark energy, the agent that is accelerating the universe's expansion and will determine its far future.

The new method extends a technique in which astronomers use quasars - ultra-bright radiation from black holes feeding on gas - as beacons to understand space. Because of their intensity, quasars are relatively easy to spot in astronomers' observations, even at extreme distances (over 95% of the way across the observable universe.)

This video shows light from a quasar, split into its different colours (or wavelengths). As the light travels through the universe towards the Earth, two things happen: first, the expansion of the universe causes the light to redshift (colours become redder and wavelengths become longer). Second, the clouds of gas absorb some very specific colours of light, progressively eating chunks out of the full spectrum. Analysing the light when it arrives at Earth allows us to reverse-engineer the process and so understand the intervening clouds. Doing this for a million quasars should allow us to learn a great deal about the distribution of matter, including both the gas and the galaxies and quasars that bathe the gas in radiation.

That gas is in the form of atomic hydrogen, which blocks a very specific wavelength of light known as Lyman-alpha. Astronomers can split the light of a quasar into a spectrum, and see where the dark Lyman-alpha lines appear. The result is a dense 'forest' of lines corresponding to the many clouds of hydrogen that the light has passed through on its journey from the quasar to our telescopes.

But, crucially, not all the gas in the universe contributes to these dark lines. When hydrogen is bombarded by ultraviolet light it becomes ionised - the two component particles are separated - which renders it transparent. This means the pattern and density of Lyman-alpha lines map out the location of ionised and neutral regions of the universe.

Studies have long revealed that the universe does in fact produce a steady supply of ultraviolet light, clearing much of the neutral hydrogen fog. But the source and intensity of this light is uncertain. There are two competing possibilities: one is that the quasars themselves - a comparatively small number, but individually extremely bright - provide the radiation. The other is that much dimmer (but far more numerous) galaxies are largely responsible. These galaxies would be so faint and distant that we can't see the majority of them individually. If galaxies caused the intergalactic gas to be ionised, we'd expect to the remaining dark gas to be relatively evenly-spread across the universe. If quasars did it, we'd find a much less uniform distribution, with some areas near-transparent and others strongly opaque. The new research shows how the difference would be detectible through the statistical analysis of Lyman-alpha lines across huge numbers of quasars.

Current samples of quasars aren't quite big enough for a robust analysis of the subtle differences between the two scenarios. However a number of surveys currently being carried should shed light on the question.

Chief among these is the DESI (Dark Energy Spectroscopic Instrument) survey which will include detailed measurements of about a million distant quasars. Although these measurements are designed to reveal how the expansion of the universe is accelerating due to dark energy, the new research shows that results from DESI will also determine whether the intervening gas is uniformly illuminated. In turn, the measurement of patchiness will reveal whether light in our universe is generated by 'a few cities' (quasars) or by 'many small towns' (galaxies). "It's amazing how little is known about the objects that bathed the universe in ultraviolet radiation while galaxies assembled into their present form," says co-author Hiranya Peiris. "This technique gives us a novel handle on the intergalactic environment during this critical time in the Universe's history."

"It's good news all round," Pontzen concludes. "DESI is going to give us invaluable information about what was going on in early galaxies, objects that are so faint and distant we would never see them individually. And once that's understood in the data, the team can take account of it and still get accurate measurements of how the universe is expanding, telling us about dark energy. It illustrates how these big, ambitious projects are going to deliver astonishingly rich maps to explore. We're now working to understand what other unexpected bonuses might be pulled out from the data."

This image may be freely reproduced providing the credit is retained.