An artist from UCL Slade School of Fine Art gave an identity to TfL workers in a remarkable way and encouraged commuters to see them as valued individuals. 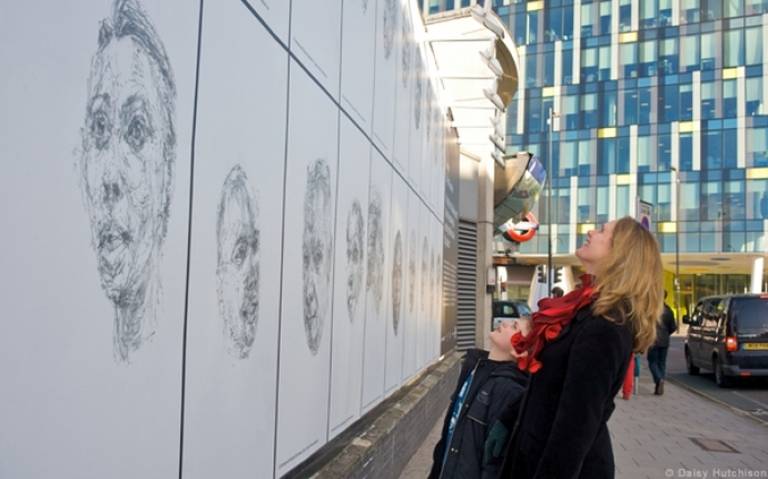 The London Underground can be a faceless and dehumanising experience and tube workers often find themselves on the receiving end of commuter complaints and frustrations. In a unique project, artist Dryden Goodwin (UCL Slade School of Fine Art) brought their individual stories to life through a series of 60 pencil portraits and films.

His project ‘Linear’ captured Jubilee Line staff while they were at work or during a moment of pause during their day. The portraits of their face and head captured a sense of their personal contributions and their background stories.

These seemingly simple portraits engaged with passengers, demonstrated the power of contemporary art in public spaces and gave an identity to a community of TfL workers in a remarkable way.

Dryden drew the portraits in a variety of locations such as train operator’s cabs, signalling towers, management offices, station control rooms, ticket offices, and gates. The duration each drawing took was juxtaposed with the number of years each member of staff had worked on the Jubilee Line.

The drawings were displayed on a wide variety of poster sites, digital screens, and special exhibition sites across the London Underground network over two years from 2010 to 2012. Films, which captured the workers in conversation with the artist, were also viewed online - unlocking the creation of each portrait.

At a public meeting, the then Head of Customer Service Strategy described it as "the best piece of work we've achieved in humanising our staff". The project had a significant impact with more than four million people travelling on the Tube every day. Screenings and presentations also followed at the National Transport Museum, Canary Wharf and the National Portrait Gallery, as well as a major group exhibition at London's City Hall.

The project also had a tangible impact on the Art on the Underground curatorial strategy, it also led to the commissioning by Invisible Dust of Dryden’s an animation ‘Breathe’ (2012) shown as a large project on St Thomas’s hospital opposite the Houses of Parliament – a project which also used portraiture to make the vital issue of urban air pollution visible and in doing so engaging  policymakers, students and the wider public about the issue.

“I was very proud of my involvement from start to finish.

“For some reason [it] made me feel valued as a member of staff.

“Gripping, thought-provoking and evocative of life in the big city.

This first episode in the Made At UCL podcast series features 3 disruptive discoveries stories. Pencil portraits of tube workers is featured second.