Using the power of storytelling, creative writing and empathy, UCL’s Special Collections helped to teach pupils about the Battle of the Somme and why we should remember those who fought for our liberty as part of the Shrouds of the Somme project last year. 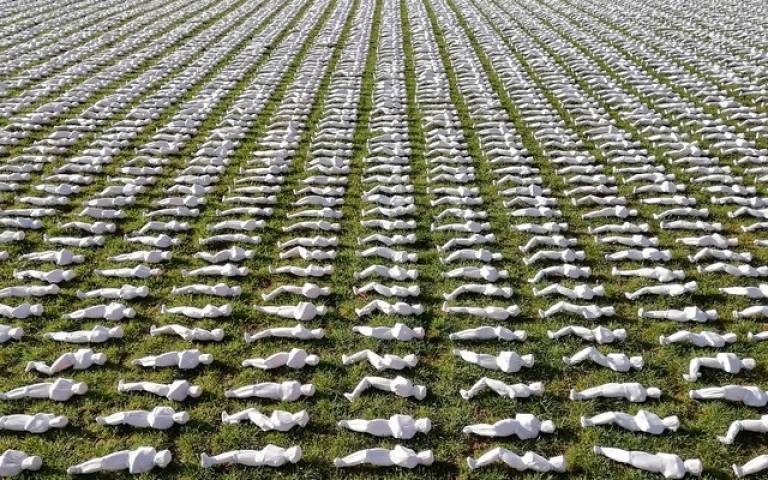 To mark the centenary of the end of the First World War, UCL’s Special Collections developed an immersive First World War education programme as part of the Shrouds of the Somme project to help thousands of children learn about the Great War and understand the gravity of the loss of life.

The Shrouds of the Somme project started with artist Rob Heard who spent five years hand-making more than 72,000 small shrouded figures, each one representing one of the men killed in the bloodiest battle in British military history, and whose bodies were never recovered. It was one of the centrepieces of the Armistice commemorations that took place at the Queen Elizabeth Olympic Park last November. The installation welcomed just under 3,000 school pupils as well as around 85,000 members of the public.

As a key partner on the project, UCL Special Collections delivered 33 educational workshops to 13 schools in the neighbouring Olympic Park boroughs (Tower Hamlets, Hackney, Waltham Forest, and Newham) reaching around 1,000 pupils. By selecting and sharing items from UCL and affiliated archives, Special Collections revealed and recreated what life was like for soldiers at the Battle of the Somme.

Many of the classes participating in the workshops were given the opportunity to visit the installation - providing pupils an in-depth, enriching experience that gave young people the opportunity to absorb the enormity of the Somme and its impact.

“You can teach the details but one thing that's almost impossible to do is help children to understand the scale of the sacrifices made during the First World War. Visiting the site of the Shrouds helped bring this message home.

“The Shrouds of the Somme presented schools with an invaluable opportunity to engage with the history of the First World War around Armistice Day; it was a unique representation of one artist's efforts to memorialise the many thousands of soldiers lost in action at one particularly devastating battle.