This innovative and interactive tour was designed to shed light on the people and places that have contributed to Bloomsbury’s rich and diverse LGBTQ+ heritage. 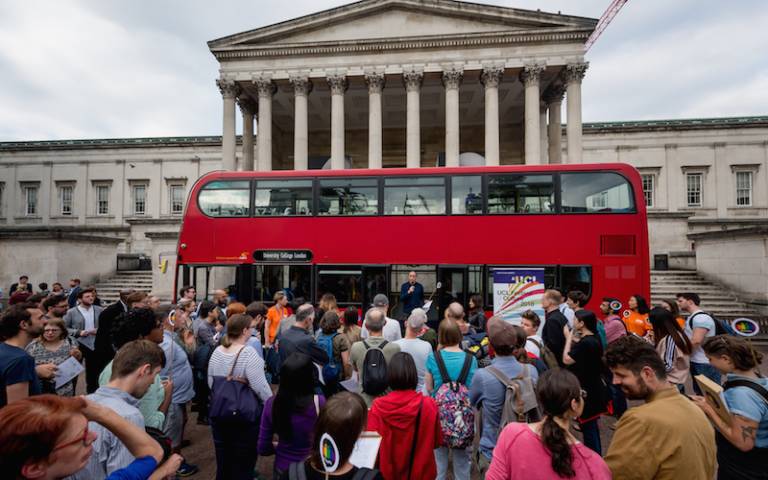 Bob is Professor of Medieval Studies and former director of qUCL
– a university-wide initiative that brings together UCL staff and students with research and teaching interests in LGBTQ studies.

Hide & Seek began at UCL’s South Cloisters with an introductory talk in which Bob highlighted some of the LGBT histories around UCL. These included Jeremy Bentham, whose preserved skeleton, dressed in his own clothes with a wax head, sits in the Cloisters. Bentham was an early advocate for homosexual law reform.

On the tour volunteers from among the wider UCL community – drawing especially on members of staff and PhD students attached to the Out @ UCL and qUCL networks – recounted stories and anecdotes connected with specific locations along the route, including images and quotations.

Participants were encouraged to form impromptu groups, issued with route maps, and set off on a ‘queer’ exploration of the neighbourhood. Some shared their own experiences and stories, adding a personal dimension to the tour.

Hide & Seek was such an enormous success that it had a waiting list and the event ran twice more as part of the UCL Festival of Culture and UCL’s offering for the Bloomsbury Festival in 2018.

In recognition of his work developing the tours, Bob also won the 2019 UCL Provost’s Public Engagement Award for Established Public Engager of the Year.

“History affects us emotionally as well as intellectually. It helps build a sense of connection to others both now and in the past. One of the aims of Hide & Seek was to foster a sense of solidarity among UCL staff, students and the wider LGBT+ community. By embedding UCL’s own queer histories and heritage in the broader landscape of Bloomsbury, I’d like to think that we played a part in furthering this goal.

Bob is currently working with UCL Urban Laboratory to turn the walk into an audio tour with podcast-style contributions from the volunteer guides to ensure diverse voices are heard throughout. The tour also provided inspiration for The Queer Tapestry, an exhibition in UCL Cloisters in February 2019, which Bob helped curate in collaboration with the Alumni Office and Out @ UCL.